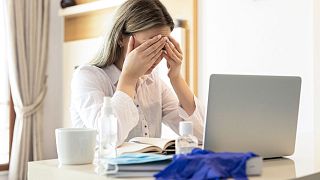 Nearly half of European workers surveyed by LifeWorks are at a high mental health risk, and more than one-third say this is hurting their productivity.   -  Copyright  Canva
By Natalie Huet  •  Updated: 02/11/2022

There's been lots of talk lately about workers demanding more flexible hours, leaving their jobs in droves, or opting for "quiet quitting" in the workplace.

One factor behind these trends is that many are feeling so anxious and run-down these days that they're seeking a way out of their malaise.

The COVID-19 pandemic, the war in Ukraine and now the cost of living crisis are battering the morale and productivity of European workers in an unprecedented way, according to research by wellbeing services company LifeWorks.

More than 500 people took part in an online poll in April in France, Germany, Italy, Spain, the Netherlands and Poland. Nearly half said they were feeling more sensitive to stress than before the pandemic.

And one-third said their mental health was negatively impacting their productivity.

Overall, 41 per cent of those surveyed by LifeWorks were considered at high risk of eventually having a mental health disorder, such as diagnosed anxiety and depression.

That’s nearly three times the share found in surveys it carried out in 2017-2019, before the pandemic.

“This period of time will be noteworthy in history, I think, for the relentless upheaval that populations are going through,” LifeWorks’ global leader of research Paula Allen told Euronews Next.

“When you think about what Europeans have gone through over the last while, you really get a sense of why that happened. We had this pandemic, the economic impact of the pandemic, the increased isolation, a sense of loss of control,” she said.

Younger people, women, parents and those on lower incomes are struggling the most, the report found. The correlation between income and mental health is “very strong,” Allen said.

Now European workers are also growing anxious about high inflation and the fear of not being able to make ends meet, she said.

More than a third of respondents said they do not have emergency savings to rely on.

All of these countries had a “strained” mental health score, far short of the “optimal” category which has a score of 80 to 100.

More than half of all respondents noticed their colleagues were also more sensitive to stress than before the pandemic. This highlights more tensions in the workplace, such as “somebody snapping a little bit more or somebody being a bit more distant,” Allen said.

That feeling of isolation was highest in France, reaching 40 per cent of workers, followed by 39 per cent in Poland, 37 per cent in Spain, 35 per cent in Italy, and 28 per cent in Germany.

This isolation is not only bad for our minds, but it’s also bad for our bodies. Research suggests it puts people at a higher risk of cardiovascular issues and immune system disorders – and it’s insidiously becoming the new normal, Allen warned.

“We have gotten used to our worlds being smaller over these past two years, and many people are actually feeling that that is okay,” she said, stressing that this is not a good thing for our mental health.

“If you get accustomed to something, it becomes more comfortable, even if it is not good for you,” she said, drawing a comparison with how cars and machines have made our lives less physically active.

“We have technology, we have the ability to sort of live by ourselves and work from home and not connect. It might feel comfortable right now, but it's not good for our minds not to have that social relationship,” Allen said.

We have become very efficient in our work. We can transact in these 20-minute Zoom calls and then move on. But that doesn't build a sense of belonging.

A separate study by researchers at Boston University and the University of Canterbury has found that remote workers reporting the most feelings of loneliness think about leaving their job more often than the “least lonely” employees.

More than 1,000 remote workers were surveyed for that study, commissioned by the hospitality brand Selina, which targets digital nomads, and the advocacy movement #WorkAnywhere.

It found that the loneliest employees were those working from home, while those who felt most fulfilled and connected to other people were those using co-working spaces.

What can companies do?

One positive finding from LifeWorks’ study is that most respondents – 63 per cent – said they were likely to reach out for professional help if struggling with stress or a mental health issue. And more than three-quarters felt optimistic about the future.

Businesses can – and should – help their employees weather this mental health storm, Allen said.

They can offer counselling services to their employees, but also financial education programmes and savings plans to help them address the money factors of stress.

Finding ways to support employees who have to care for children or other relatives can also help.

On a day-to-day basis, Allen said companies need to pay extra attention to allowing time for personal contact between people – manager and employee, employee and employee, “like creating forums where people can connect on a personal level”.

“That’s hugely important because it helps build our sense of belonging,” she said.

“We have become very efficient in our work. We can transact in these 20-minute Zoom calls and then move on. But that doesn't build a sense of belonging. So organisations really should do well to create a culture where there is more space to have that kind of social contact”.

This social connection is all the more vital to engage and retain younger employees – the Millenials and Gen Z workers whose mental health is showing the greatest signs of strain.

“When you're young and new in your career, it's super, super important to feel like you're on the right path,” Allen said.

“So having recognition, having contact, having mentorship – even in a virtual situation or even as we're transitioning into hybrid work – for that younger group, it's going to be more important”.

Is remote tutoring the answer to Europe’s teacher shortage?

Twitter: Musk defends mass layoffs saying he had 'no choice'