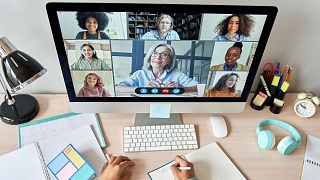 One of the great challenges facing education across Europe is a lack of teachers.

According to the latest EU data, 35 out of the 43 education systems across the bloc reported a shortage of teachers last year.

This school year in France, for example, students returned after the summer holidays to a system with 4,000 unfilled posts.

In the UK, a survey from the Association of School and College Leaders (ASCL) found 95 per cent of state sector school headteachers have been experiencing difficulty in recruiting teachers, with 43 per cent saying the difficulty is “severe”.

The ASCL has said the difficulty in recruiting and retaining teachers is a result of levels of pay, and increased workloads. The shortages result in larger class sizes, and teachers being drafted in to teach subjects they are not specialists in.

It’s this problem that Vienna-based edtech company GoStudent is hoping to try to solve with its remote tutoring platform.

Speaking to Euronews Next at the Web Summit tech conference in Lisbon, Ohswald explained the platform serves some 5 million students running on three core pillars,: a one-to-one tutoring platform, a content and homework assigning platforms for schools, and an “unmanaged marketplace” where tutors and students can negotiate their terms amongst themselves.

“On the one-to-one tutoring side, most of our teachers are doing it as a side job. So, these are people that are either super smart university students, and they have a passion for science or for chemistry or for history, for example, and they want to make an additional income, but they want to have the convenience. They just want to focus on teaching the kids”.

He says tutors also like the community aspect, where they can connect and learn from each other.

The coronavirus pandemic ushered in a period of astonishing growth for certain tech companies, with people around the world being forced to restructure how they lived their lives amidst lockdowns, travel restrictions, and closures of businesses, schools and other institutions.

GoStudent was one of those.

“There's two effects that we have seen during and after the lockdown period,” said Ohswald.

The first was an “after effect,” where children who were facing learning gaps following school closures needed to catch up on their education.

According to a McKinsey report published in April this year, schools were fully or partially closed in Europe for 30 weeks on average, leaving students around four months behind. The learning gap was far greater for students in other parts of the world.

Furthermore, the suspension of normal day-to-day life led to a “huge acceleration towards digitalisation,” he said.

But that massive growth has since slowed, and - attributing the problem to the wider economic downturn - GoStudent reset its growth targets this summer, laying off a tenth of its workforce, around 200 people.

It has however seen collaborations with other companies flourish, including Berlin-based e-bank N26 which has also seen major growth over the past few years

N26 told Euronews Next the partnership “aims to support parents and children for a more financially organised world”, with N26 customers getting free and discounted finance lessons which differ depending on the customer’s age and needs.

Lessons in the metaverse

Ohswald believes, though, that the education space is “at this inflection point where you can combine the personal element with accessibility” - and it is this accessibility which serves students so effectively.

Because the platform can break down geographical barriers, he told Euronews Next, students in poorer or more remote areas can access education, as long as they have internet access.

“I think in 10 years from now, with the push of a button, any kid in the world will be able to access an amazing teacher,” he said.

But for Ohswald, the ultimate future of education lies in the metaverse, where students will be able to “enter a different world just at the push of a button”.

“I am a strong believer that the future of the classroom is going to be virtual. A hybrid concept. I think the beauty of virtual reality is, you can basically beam children into any sort of environment that they want to be in, whether it's a different planet, a different country, or a restaurant, and they can still have the social aspect of it,” he said.

It still comes with some uncertainty, he warns.

“The question is, how can you leverage that technology to basically create a better education experience? For kids. And especially when you go back to the first question you ask me, like, what is actually the problem that you're trying to solve? Teacher shortage. And solving that, that's what you can do with virtual reality while creating a social environment”.