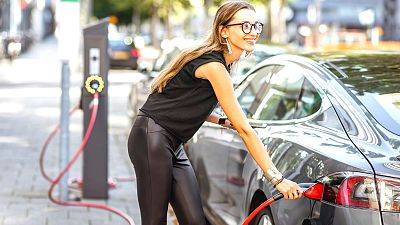 Electricity prices have soared, but it’s still cheaper to recharge an EV than to refuel at the pump – green campaign group Transport & Environment did the maths.   -   Copyright  Canva   -
The opinions expressed in this article are those of the author and do not represent in any way the editorial position of Euronews.
By Fabian Sperka  •  Updated: 01/11/2022

Even if electric cars still cost more to buy than petrol cars, battery-electric vehicles have long been cheaper overall to own and run.

This is largely because recharging has typically cost much less than refuelling, so owning an electric vehicle (EV) would pay off after a couple of years. This is an irrefutable fact – or at least it was until recently.

Europe’s ongoing energy crisis, fuelled by Russia’s invasion of Ukraine and threats to cut off gas supplies, not only stirs up fears of a cold winter but is also sending electricity prices sky-high, due to the high share of gas in power generation.

Oil supply, on the other hand, was less affected and many European countries are heavily subsidising petrol and diesel.

In September, the average EU household had to pay a staggering 72 per cent more for each kWh of electricity than a year before. At the pump, aided by governments’ generous subsidies, fuel prices have increased less: diesel by 36 per cent and petrol by only 15 per cent.

The unprecedented surges in electricity prices have thrown into question the notion that recharging is cheaper than refuelling, and some are already predicting that the transition towards e-mobility will come to a sudden halt.

But looking at the facts, is the situation really that dire?

The short answer is no. Even in the midst of unprecedented market distortion, recharging is on average still significantly cheaper than refuelling.

The long answer is less straightforward.

The role of fuel subsidies

One reason for low diesel and petrol prices is fuel tax subsidies.

In the wake of the Russian invasion of Ukraine and the initial spike in petrol and diesel prices, many countries started to artificially reduce the price for end consumers through massive subsidies. EU countries will have spent more than €27 billion this year to lower the price per litre by more than 30 cents in some cases. In some countries, this has pushed prices back down to – and even below – pre-crisis levels.

Charging electricity can be more expensive than petrol or diesel when charging at a super-fast charger along a busy motorway. Charging at a slow AC charger on the other hand, especially with a monthly or yearly subscription, will cost only a fraction of what you pay to re-fuel your car – even today.

But it’s worth bearing in mind that 90 per cent of EVs are actually charged at home, work or other private charge points, according to the European Commission. And this charging mode is usually the cheapest of all.

A T&E analysis of household electricity prices in EU capitals (up-to-date national prices are not available) and weekly petrol and diesel prices shows that driving 100 km with an average electric car in September 2022 cost about €6.50 – if the car was charged at home.

But this doesn’t play out equally in all countries.

In Italy and Germany, where electricity prices are among the highest in Europe – due to their heavy reliance on gas – the differences are only marginal at the moment, at least for diesel compared to electricity.

Meanwhile, drivers can save up to 117 per cent by recharging instead of refuelling in Spain, and a staggering 170 per cent by plugging in instead of filling up in Poland.

While our analysis is based on the average electricity price in each city, it is important to remember that electric cars are mostly charged during off-peak hours at night. Hence, it is cheaper for the many consumers who have a different day/night electricity rate.

Renewable energy is the cheapest in the long run

The current price hike is due to Europe’s overreliance on fossil fuels in general and Russian gas in particular.

The best way out of this would be a massive increase in renewable energy sources. This would not only bring down electricity prices in the medium and long term, but is also the only real way Europe can secure its energy supply in an increasingly unpredictable geopolitical environment.