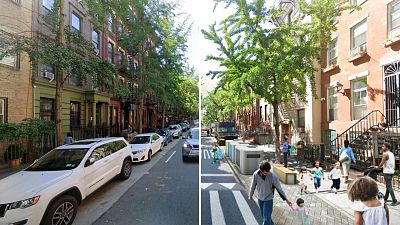 The 20th century saw the world reorient itself around the introduction of the car.

Streets were widened, houses gained garages, shops needed mass parking. The modern city is built in the image of the car.

But what if it didn’t have to be like that?

Teams of architects are questioning what cities could look like in the future, and they agree on one bold idea: Get rid of cars.

There are plenty of reasons why we’d want to get rid of cars. They take up a ridiculous amount of room in our cities. We build wide roads to fit lanes of cars that can run through city centres, while space for people to walk at leisure, meet friends and hang out is eroded.

We dedicate half of all our public space in Europe to cars.

One major reason we should want to rid of cars from our cities is the damage they do to the planet.

Traditional fossil fuel cars, motorbikes, buses and trucks contribute to a third of all transport carbon emissions; 12 per cent of CO2 emissions in the EU are from driving cars.

The emissions from these vehicles are also causing health hazards to the people breathing them in daily. 96 per cent of the urban population of Europe is exposed to harmful levels of pollution.

Even if all of our vehicles were carbon neutral though, cities with car-based infrastructure are still bad for the planet. On top of all that is the added risk cars put to our lives, as road traffic crashes are the eighth biggest cause of death, resulting in 1.35 million fatalities a year.

What can we do?

Dr. Robert Martin, head of mobility at Danish architectural firm JAJA, believes we have to go back to the drawing board of cities. JAJA has worked on multiple plans for ways to remove cars from cities and redesign urban spaces.

Instead of forecasting the future, which requires leaving assumptions about the present in place, Martin prefers backcasting.

“Architects are used to imagining what could actually be here. And so we get together different stakeholders to design these desirable futures, and then you develop roadways, and pathways to get there,” Martin says.

There’s no need to rebuild the city from the foundations though. Martin advocates for the concept of the ‘15-minute city’.

“The 15 Minute City movement, I think, was a bit misinterpreted,” Martin explains.

“People literally thought that an entire city had to fit in within 15 minutes. If you're talking about Shanghai, that’s impossible.”

Instead, he explains, it’s about creating several urban centres within a city. Removing the primacy of the downtown hub, people convene in their own local hub which has all their regular amenities.

“It's not about trying to retrofit an entire city, but actually create more local hubs so that people aren't necessarily driving an hour in every direction,” Martin says. “Within a 15 minute walk or cycle you're able to go to a supermarket, get to a doctor, and have a park nearby.”

JAJA is based out of Copenhagen, a city which is often heralded for its lack of cars and bike-friendly infrastructure.

“Over the last 20 years, Copenhagen’s seen an exponentially increasing amount of car ownership in the city centre.”

Still, the ideal of Copenhagen is the genesis of the change JAJA wants to see in more cities. Put them on a “mobility diet”, Martin suggests, and reprioritise lanes for cars for people to walk and cycle in.

Where you aren’t creating cycle routes, there’s also the opportunity to build green spaces as carbon and heat sponges.

“All kinds of public land in this version is designated for public services. There's still private parking garages, but that's not where people are,” Martin explains.

He points out that cars will still have a purpose for a long time. It’s about reducing them, not eradicating them completely. The need to travel privately around countries and the transport of goods into cities can’t be wished away by the desire for a better city.

So, Martin suggests that for personal use, the attitude to car ownership itself changes.

Why should every home have their own car, when they can be shared for the rare instances they’re needed? In a city where amenities are close-by and public transport improved, it will only be irregular cross-country journeys that need a personal vehicle.

Zipcar is a popular car sharing app in London. One day, it could be the standard.

Then there’s the way goods are brought into cities.

For this, Martin points to many of the systems already in place. Trucks travel into city centres at night to avoid traffic, and for smaller packages, “London's one of the leaders actually in terms of cargo bike delivery,” he says.

“Cargo bikes are not only better for the environment, they deliver quicker and it's probably a higher quality of life, if you're a delivery driver doing that as opposed to sitting in a van."

Changing the identity of a city

London is one of the touchpoints for another architect whose firm has worked on plans to redesign major cities.

PAU is a New York-based architect firm that has created plans for New York City without cars.

Founder and creative director of PAU Vishaan Chakrabarti believes that “private cars and cities don’t make a lot of sense.”

Chakrabarti shares Martin’s belief in the importance of smaller modular cities, and believes inspiration can be taken from London’s approach to high streets.

“London has for centuries had this notion of the multimodal city, where you could live around a high street and get most of your needs,” Chakrabarti says.

“If you still needed the larger city, if you wanted to go to a major park or a museum, you could still get on the tube and leave that 20 minute zone."

Chakrabarti points to industrial revolution era city planner Ebeneezer Howard, who founded the garden city movement which began a move away from the multimodal city structure towards the spread-out suburban living that prioritises cars as a means of transport.

“In the timespan of about 50-75 years, we created this auto-based living environment called the suburb. I think it's really important for people to understand this, because I think most people walk around and think what is around them has always been here. And that's just not true,” Chakrabarti says.

To achieve lasting change to the way cities are designed, we can’t just reassess where the cars used to be. We have to also change the buildings around us.

Chakrabarti points to PAU’s Domino Sugar Refinery plans in Brooklyn, where they want to change the old factory into a hybrid hub of workspaces, as well as “amenities for schooling, health care, shopping, and so forth.”

Convincing policy makers to adopt these changes is also an important step to consider.

Although the assumption is that car manufacturers would provide the biggest pushback to these sorts of plans, Chakrabarti expects more from the average person. To do any of this, the government subsidies for road infrastructure and car purchasing will have to go.

“Take someone who is upper middle class and drives a Mercedes SUV into the city every day to drop their kids off and go grocery shopping. Telling that person we're going to start taking those subsidies away, that’s a hard political conversation,” he admits.

But the solution comes drip by drip. Building on practices of car-free days in cities, reduced emission requirements will create nicer, quieter cities. Letting people appreciate that is key to long-term policy change.

As Saudi Arabian architects push forward with their dystopic ‘The Line’ city, a 170 km long city built from scratch in the desert, it’s interesting to question how the city will continually shift.

It’s unlikely the €484 billion Saudi project will become the benchmark for all cities, but Chakrabarti does suggest another way: Wakanda, the fictional country of Marvel’s Black Panther series.

“If you look carefully at the art direction of Wakanda, you'll notice a couple of things,” Chakrabarti says.

“The streets are very mixed use, but there’s not a lot of cars. There's a mass transit system that whizzes around, but there are very few cars. As a consequence, the skyscrapers they show sit right next to farmland. So, if there is no suburban layer between the city and the farm, the city and the farm sit right next to each other. And that's because no one's driving."

Removing the step between farmland and city takes away the issue of supplying the city with goods from far away, reducing the carbon taken to bring agricultural products to people.

It took 75 years to develop the suburbs. What if in the next 75, we developed those kind of cities?