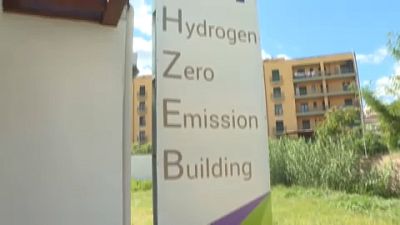 The building in Benevento, Italy, is the first house in Europe to be powered by hydrogen fuel cells.   -   Copyright  Euronews
By Joao Vitor Da Silva Marques  & Luca Palamara  •  Updated: 22/09/2022

The energy crisis and climate change are forcing European institutions to find ways to reduce their use of fossil fuels and slash carbon dioxide (CO2) emissions.

Researchers at the University of Sannio, in southern Italy, have come up with one solution hitting both targets.

Together with a consortium of research bodies and private companies, they have built the first house in Europe powered by hydrogen fuel cells.

The building in Benevento is a student house but also a living laboratory – a real-life experiment to assess the benefits and limitations of these technologies for future applications in the residential sector.

"Lately we have focussed on the issue of CO2 emissions in the environment and worked on the idea of using hydrogen to make this house a completely self-sufficient system,” the dean of the University of Sannio, Gerardo Canfora, told Euronews.

The fuel cells fully powered by hydrogen generate the electricity and heating needed to meet the building's needs, according to the team at the University of Sannio.

That's not all – the building also produces renewable energy from solar and geothermal sources and is being hailed as a result as a "zero-emission building".

The building was designed and built with the help of the Stress Consortium, a technology research centre for sustainable construction.

In her latest State of the Union speech, the president of the European Commission Ursula von der Leyen announced the creation of the European Hydrogen Bank, with plans to invest up to €3 billion in hydrogen technology.

“Most likely, this hydrogen bank will be needed to fill the gap between the production of energy from fossil fuels and the production of electric power through the use of hydrogen, which is a carrier that does not cause pollution,” STRESS President Ennio Rubino told Euronews.

For more on this story, click on the video in the media player above.

This ‘smart bin’ sorts recycling so you don’t have to