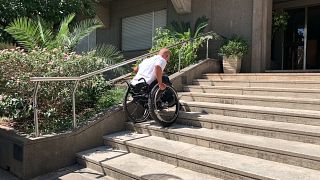 In the Italian capital Rome, mobility can be a challenging experience for people with disabilities.

Under the current legislation dating back to 1986, Italian municipalities are obliged to remove all architectural barriers - but less than 5 per cent of them have actually done so.

People with reduced mobility are often the first ones to pay the price; not lease because of obstacles but also for the city’s waste management problems with rubbish often getting in the way as they try to move around.

Rome’s new mayor Roberto Gualtieri has pledged to transform the capital and address some of its long-term issues using both funds for the Vatican's Jubilee Year 2025 and the EU's National Recovery and Resilience Plan (or Piano Nazionale di Ripresa e Resilienza, PNRR, in Italian).

Years of mismanagement and lack of maintenance works have badly affected public transport services around the city.

One person is who suffering from the years of neglect is Dario Dongo, a lawyer and the founder of Egalité, an association that has been fighting for the rights of disabled people in Italy and specifically in Rome.

His organisation has reported Atac (Rome’s municipal unit for public transport services) several times to local authorities for its poor service to disabled people but little has changed so far.

Dongo took Euronews along on his daily commute, which involved trying to avoid holes in the pavements, and navigating missing ramps and steps. At one point, he is forced to travel in the middle of the road.

On arriving at a metro station in the heart of Rome's historic centre, Dongo is forced to wait at a non-functioning stairlift for 30 minutes only to be told he needs to make a connection to another metro station.

'Working non-stop to get back to normal'

"For the past 14 years our systems and infrastructures have not been maintained and they have not been revised. So, today we have inherited quite a heavy legacy which means that for the next three years we’ll have to work non-stop to bring everything back to normal," Eugenio Patanè, is the Deputy Mayor for Mobility, Municipality of Rome, told Euronews.

"That means new investments and funds which we have thanks to the PNRR plan and the upcoming Jubilee. All we need now is to make them fully operational. We have to organize tenders and do proper maintenance works but most importantly we need planning".

Despite the challenges, Dongo doesn’t want to stop moving around and says that he hopes that his battle may help improve the situation for everyone.

"Only by doing, so things they can change, especially by putting pressure on those in authority from the ground up. We should all expect things to [change] and complain if they don't, otherwise they’ll never be fixed".

You can watch the full report on Dario Dongo's daily commute in the media player above.