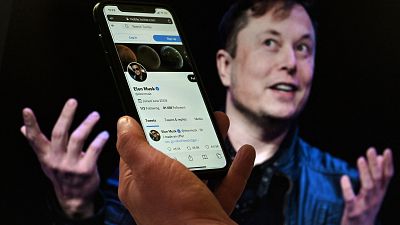 (FILES) In this file photo illustration, a phone screen displays the Twitter account of Elon Musk with a photo of him shown in the background, on April 14, 2022, in Washington   -   Copyright  OLIVIER DOULIERY/AFP
By Euronews with AP  •  Updated: 13/07/2022

Twitter has sued Tesla CEO Elon Musk, trying to force him to complete his $44 billion (€43 billion) takeover of the social media company by accusing him of “outlandish” and “bad faith” actions that have caused the platform irreparable harm and “wreaked havoc” on its stock price.

The social media company filed suit against Elon Musk in the Delaware Court of Chancery on Tuesday after Musk said he was ending his deal to buy Twitter last week, citing Twitter bots as the reason and claiming that the company did not give him the information he needed to evaluate the deal.

Back in April, Musk pledged to pay $54.20 9€53) a share for Twitter, which agreed to those terms after reversing its initial opposition to the deal. But the two sides have been bracing for a legal fight since the billionaire said Friday that he was backing away from his agreement to buy the company.

“Musk refuses to honor his obligations to Twitter and its stockholders because the deal he signed no longer serves his personal interests,” reads the lawsuit.

“Having mounted a public spectacle to put Twitter in play, and having proposed and then signed a seller-friendly merger agreement, Musk apparently believes that he — unlike every other party subject to Delaware contract law — is free to change his mind, trash the company, disrupt its operations, destroy stockholder value, and walk away,” the suit stated.

As part of the April deal, Musk and Twitter had agreed to pay each other a $1 billion (€996,000) breakup fee if either was responsible for the deal falling through. The company could have pushed Musk to pay the hefty fee but is going farther than that, trying to force him to complete the full $44 billion purchase approved by the company’s board.

“Oh the irony lol,” Musk tweeted after Twitter filed the lawsuit, without explanation.

The arguments and evidence laid out by Twitter are compelling and likely to get a receptive ear in the Delaware court, which doesn’t look kindly on sophisticated buyers with highly-paid legal advisers backing off of deals, said Brian Quinn, a law professor at Boston College.

“They make a very strong argument that this is just buyer’s remorse,” Quinn said. “You have to eat your mistakes in the Delaware Chancery Court. That’s going to work very favorably for Twitter”.

Musk alleged Friday that Twitter has failed to provide enough information about the number of fake accounts on its service. Twitter said last month that it was making available to Musk a ″fire hose” of raw data on hundreds of millions of daily tweets.

The company has said for years in regulatory filings that it believes about 5 per cent of the accounts on the platform are fake. Musk is also alleging that Twitter broke the acquisition agreement when it fired two top managers and laid off a third of its talent-acquisition team.

Musk “has been acting against this deal since the market started turning, and has breached the merger agreement repeatedly in the process".

While the company has said it cooperated in providing the data he requested on fake “spam bot” accounts, the lawsuit suggests Twitter was concerned that disclosing too much “highly sensitive information” could expose the company to competitive harm if shared.

The biggest surprise for Quinn was how much evidence Twitter has -- for instance, communications with Musk about whether to retain or lay off employees, as well as the billionaire’s own public tweets -- to reject his arguments for backing out.

“They are marshaling many of Musk’s own tweets to hoist him on his own petard,” he said.

In a joint press release announcing the acquisition deal, Musk pledged to “unlock” the social media company’s potential by loosening restrictions on speech and rooting out fake accounts. Among his most attention-grabbing promises was to let former President Donald Trump back onto the platform. Musk argued that Twitter’s ban of Trump following the January 6, 2021 insurrection at the US Capitol was “morally bad” and “foolish in the extreme”.

“For Musk, the best case is he pays the $1 billion breakup fee but that appears very unlikely,” said Wedbush Securities analyst Daniel Ives.

“The irony is that Twitter as a fiduciary is clearly looking to enforce a deal that Musk doesn’t want to get done. It’s like buying a house you don’t want”.

Twitter's suit calls Musk's tactics “a model of hypocrisy,” noting that he had emphasized plans to take Twitter private in order to rid it of spam accounts. Once the market declined, Twitter said, "Musk shifted his narrative, suddenly demanding ‘verification’ that spam was not a serious problem on Twitter’s platform, and claiming a burning need to conduct ‘diligence’ he had expressly forsworn.”

Similarly, the company charges that Musk operated in bad faith, accusing him of requesting company information in order to accuse Twitter of providing “misrepresentations” about its business to regulators and investors.

Musk “has been acting against this deal since the market started turning, and has breached the merger agreement repeatedly in the process," the suit charged.

"He has purported to put the deal on ‘hold’ pending satisfaction of imaginary conditions, breached his financing efforts obligations in the process, violated his obligations to treat requests for consent reasonably and to provide information about financing status, violated his non-disparagement obligation, misused confidential information, and otherwise failed to employ required efforts to consummate the acquisition”.

[Editor's note: This story has been updated to correct the figure in the headline to $44 billion.]