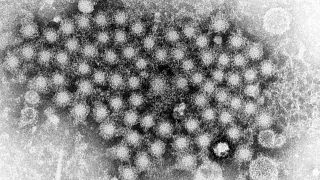 Cases of unexplained hepatitis have risen to at least 348 globally, according to the World Health Organization (WHO), which is now looking into the potential role played by adenovirus and COVID-19 infection.

Mysterious cases of acute liver disease mainly affecting young children have been puzzling health experts around the world in recent weeks. They’re now a matter of active investigation, the UN agency said, with its own experts and scientists in affected nation states working to find the cause.

In a news conference on Tuesday (10 May), Professor Philippa Easterbrook of the WHO's global hepatitis programme told reporters that there were at least 348 probable cases, with 70 more under investigation.

“I think it’s important to highlight that there are only six countries at present that are reporting more than five cases. All the remainder of the countries have less than five cases,” she said.

The majority of the cases have been reported in the UK which has seen “around 163”, and was the first country to raise the alarm, reporting 10 cases of severe hepatitis in Scotland to the WHO on 5 April, in children under 10 years old.

The United States has now also reported more than 100 cases, which were included in the WHO’s total.

Hepatitis, inflammation of the liver, is often contracted through the hepatitis virus, of which there are five main types: A, B, C, D, and E.

These new cases are mysterious because testing has shown no signs of these virus types.

Easterbrook said currently the “leading hypotheses remain those which involve an adenovirus, but I think with also an important consideration about the role of COVID as well, either as a co-infection or as past infection.”

Adenoviruses can cause a range of different illnesses, ranging from mild to more severe, and type 41 has been identified as having a possible link to the hepatitis cases.

More testing is ongoing to determine how many patients are positive for adenovirus, and how many are or have been infected with coronavirus.

“Looking at tissue samples, liver samples, none of these show any of the typical features you might expect with a liver infection due to adenovirus, but we are awaiting further examinations of biopsies,” Easterbrook said.

Out of those tested in the UK cases, she said around 18 percent were positive for COVID-19 on a PCR test, “and a big focus of the next week is really looking at the serological testing for previous exposure and infections with COVID”.

“We are hopeful within the week there will be data from the UK comparing whether detection rate of adeno(virus) in children with liver disease differs from that in other hospitalised children,” she added.

“That will help hone down whether adeno is an incidental infection that has been detected or there is a causal or likely causal link”.

Liver inflammation can affect the liver’s function, and the illness can vary in severity depending on the cause.

Health authorities in the US said on Friday that they were investigating 109 mystery cases, which included five fatalities. Three children have died in Indonesia.

A small number of children have also undergone liver transplants as a result of hepatitis.