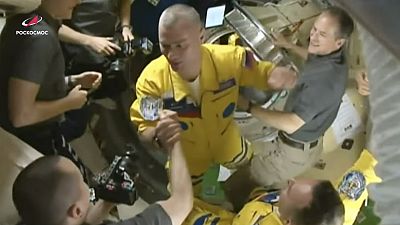 When three Russian cosmonauts arrived at the International Space Station wearing yellow flight suits with blue accents, some saw a message in them wearing the colours of the Ukrainian flag.

They shot that down that notion on Saturday.

Cosmonaut Oleg Artemyev said each crew picks the colour of the flight suits about six months before launch because they need to be individually sewn.

And since all three of them were graduates of Bauman Moscow State Technical University, they chose the colours of their prestigious alma mater.

"There is no need to look for any hidden signs or symbols in our uniform," Artemyev said in a statement on the Russian space agency’s Telegram channel.

"A colour is simply a colour. It is not in any way connected to Ukraine. Otherwise, we would have to recognise its rights to the yellow sun in the blue sky.

“These days, even though we are in space, we are together with our president and our people!”

Since Russia invaded Ukraine a little over three weeks ago, many people have used the Ukrainian flag and its colours to show solidarity with the country.

Dmitry Rogozin, the head of the space agency Roscosmos, reiterated Artemyev's point in a tweet, posting a picture of the university’s blue and gold coat of arms.

Shortly after their arrival at the orbiting station on Friday, Artemyev was asked about the flight suits. He said there was a lot of the yellow material in storage and "that’s why we had to wear yellow".