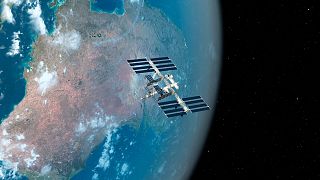 Russia’s space chief has raised concerns about the ISS’ future, hitting out at the US over sanctions that aim to “degrade their aerospace industry”.   -   Copyright  Canva
By Ian Smith  with AP  •  Updated: 26/02/2022

The head of Roscosmos, the Russian space agency, has suggested that the International Space Station (ISS) could fall out of orbit and crash into the United States or Europe as a result of sanctions on Russia.

The comments came following US president Joe Biden’s announcement of new sanctions that “will degrade their [Russia’s] aerospace industry, including their space programme”.

"If you block cooperation with us, who will save the International Space Station (ISS) from an uncontrolled deorbit and fall into the United States or Europe?" Dmitry Rogozin, Director General of Roscosmos, said in response on Twitter.

He pointed out that the station’s orbit and location in space are controlled by Russian-made engines.

"There is also the possibility of a 500-tonne structure falling on India and China. Do you want to threaten them with such a prospect? The ISS does not fly over Russia, therefore all the risks are yours. Are you ready for them?"

"Though dramatic, this is likely an idle threat due to both political consequences and the practical difficulty of getting Russian cosmonauts off the ISS safely," said Dr. Wendy Whitman Cobb, a Professor of Strategy and Security Studies at the School of Advanced Air and Space Studies.

"But I am concerned about how the invasion will affect the remaining years of the space station".

What has been NASA's response?

Four NASA astronauts, two Russian cosmonauts, and one European astronaut are currently on the space station.

NASA said in a statement that it “continues working with Roscosmos and our other international partners in Canada, Europe, and Japan to maintain safe and continuous ISS operations".

“No changes are planned to the agency's support for ongoing in orbit and ground station operations. The new export control measures will continue to allow US-Russia civil space cooperation”.

Scott Pace, the Director of the Space Policy Institute at George Washington University, told the Associated Press earlier this week that “it's possible to imagine a break with Russia that would endanger the space station, but that would be at the level of a dropping diplomatic relations".

"That would be something that would be an utterly last resort so I don't really see that happening unless there is a wider military confrontation," he added.

Recent tensions with Russia in space

The space station - an international partnership of five space agencies from 15 countries, including Canada, several countries in Europe, Japan, Russia, and the US - launched in 1998 and morphed into a complex that's almost as long as a football field, with almost 13 km of electrical wiring, an acre of solar panels and three high-tech labs.

For the ISS to function, the Russian cosmonauts and the other astronauts need to work as a team and cooperate.

There have, however, been tensions towards the Russians in recent months after a Russian weapons test in November 2021 created more than 1,500 pieces of space junk that threatened the safety of the seven astronauts aboard the station.

Ukraine to launch new 'IT army' to fight off Russian cyberattacks