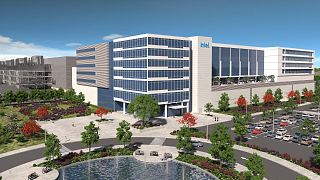 Intel has unveiled plans for a massive chipmaking site in Germany as part of a planned €80 billion investment in Europe over the next decade.

The US company said the goal is to create "a next-generation European chip ecosystem" and help tackle the ongoing global shortage of semiconductors, which has plagued the continent's carmaking industry.

With an initial investment of €33 billion, including €17 billion for the German plans, Intel's spending will help meet surging demand for chips used in computers, cars, smartphones, and other gadgets, as well as reduce in the long run Europe's reliance on Asian suppliers.

The chipmaker is spreading its investments around half a dozen countries, boosting its existing factory in Ireland, setting up a design and research facility in France, and a packaging and assembly site in Italy.

Where will the new chip plants be built?

Intel will set up two factories in the German city of Magdeburg, creating 7,000 construction jobs, 3,000 permanent jobs at the company, and tens of thousands of additional jobs across suppliers and partners, it said.

The company will invest an additional €12 billion in an Irish facility which will take its total investment in Ireland to more than €30 billion.

It is also in talks with Italy for a back-end manufacturing facility for a potential investment of up to €4.5 billion and plans to start operations between 2025 and 2027.

The company will also increase its lab space in Poland and plans to establish joint labs with the Barcelona Supercomputing Center in Spain for advanced computing.

The choice of sites comes after some EU governments including Italy have offered big incentives to try and woo the chipmaker to invest in their countries.

Spreading its factories around different countries could help the company get more subsidies from different nations.

But Intel will have to negotiate with each European country where it's locating facilities for state aid, European Industry Commissioner Thierry Breton told journalists.

He also said the Commission was talking with other chipmakers and hoping to make similar announcements in the coming months but did not provide details.