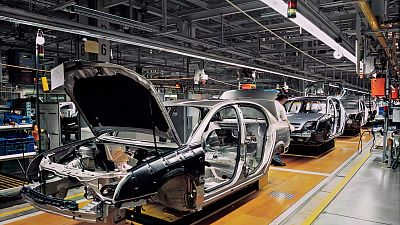 Growing mistrust between carmakers and the semiconductor industry in the wake of the global chip shortage is causing a "mismatch" between demand and supply expectations that could prolong the crisis, automotive industry watchers have warned.

The chip drought has triggered a power shift in favour of suppliers, enabling them to make stricter contractual demands on carmakers as the auto market recovers from last year’s slump, experts told Euronews Next.

Researchers said carmakers keen to make up their chip inventory shortfalls have been inflating orders to suppliers already struggling to service multiple industries in what they are calling the "toilet paper effect," likening the process to the panic buying witnessed during the early stages of the COVID-19 pandemic.

Some analysts who have forecast total car production for 2021 at between 83 million to 85 million units foresee only enough capacity in the semiconductor supply chain to meet 85 to 90 per cent of that demand by the end of the year.

"The problem we see though, is that the orders for chips in terms of cars are far above this level of 83, 84, 85 million cars," said Jeremie Bouchaud, director for the Autonomy, Electronics & Semiconductor service at IHS Markit.

“What we continue to hear of are orders more in the range of 100 to 110 million units. We even heard from one tier two [supplier] telling us they saw orders amounting to the equivalent of 132 million cars.”

"There is definitely an inflation of the orders and the demand for various reasons, for the chips. Orders for refilling inventories were needed but there is still a little bit of what we call the 'toilet paper effect' where OEMs [carmakers] and tier one suppliers who don’t get all of the chips they need then begin to order more - just in the hope of getting what they need".

He said that for this reason and because suppliers cannot realistically meet such orders currently, automotive chip shortages were likely to extend beyond this year.

Research by Fitch Ratings found the global chip shortage will prevent a total of around 3.8 million cars being made in 2021, 5 per cent of total annual output. Lost European car production represents a third of that.

The situation led Volkswagen CEO Herbert Deiss to describe his company, the world’s second largest car maker by sales, as being in “crisis mode” in May, when the company warned that the chip shortage would hit profits in the second quarter to June 2021.

A buyer-to-supplier power shift is underway

Relations between the two sectors are also experiencing a power shift that started when semiconductor suppliers were forced to focus on other industries.

While automotive began to shut down in the first half of 2020 as the COVID-19 outbreak took hold, computing, consumer electronics and communications experienced unprecedented chip demand - and suppliers were happy to oblige.

Now, with demand for cars - and automotive chips - rising again, carmakers find themselves at the back of a global queue and with less influence over suppliers than they had prior to the pandemic. The likes of Volkswagen are seemingly as much in competition with Apple and Sony as they are with BMW.

Phil Amsrud, senior automotive analyst at IHS Markit, told Euronews Next that it "could be premature" to say that the balance of power had changed, but agreed that relationships were definitely in a state of flux.

"The semiconductor suppliers are now requiring longer ‘firm order’ windows - from three months increased to 12 to 24 months - and in some cases prepayment to accept orders," he said.

"The suppliers are hopeful this will result in semiconductors being seen as more strategic than most other components and therefore treated differently. The OEMs’ response will determine if the balance of power has changed or is still evolving. Regardless of the final outcomes, things are changing however".

He added that the forthcoming cycle of annual contract negotiations should also be an indication of whether things had changed much in the relationships between the carmakers and the rest of the semiconductor supply chain.

Car sales and prices on the rise

Meanwhile, global car sales are on the rise again. Prices are increasing too, as supply struggles to meet pent-up demand.

But sales, particularly in Europe, have still not returned to pre-COVID-19 levels, seeing less of a rebound compared to the US and China.

Between January and May this year, the demand for new cars within the EU rose by 29.5 per cent to reach 4.3 million newly-registered units in total, according to the European Automobile Manufacturers Association (ACEA).

May’s passenger car registrations in the EU rocketed by 53.4 per cent compared to last year, with a total of 891,665 units. But these were still well below the 1.2 million cars sold in May 2019.

Will microchip implants be the next big thing in Europe?