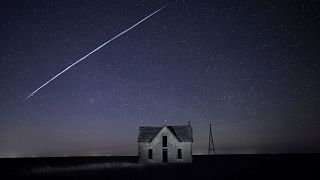 The Starlinik satellites that de-orbited were similar to these ones seen over the United States last year.   -  Copyright  Reed Hoffmann/AP Photo
By Tom Bateman  •  Updated: 11/02/2022

Last week, SpaceX launched 49 of its Starlink satellites into orbit. This is pretty normal: the company has put almost 2,000 of its broadband-beaming satellites into space so far, with plans for 40,000 more.

What's not normal is that it launched last week's batch into a geomagnetic storm that knocked up to 40 of them out of orbit.

Now footage has emerged showing at least one of the satellites burning up in the skies over Puerto Rico.

A camera operated by the non-profit astronomy organisation Sociedad de Astronomia del Caribe (SAC) captured streaks of fire in the night sky at around 2.:40 AM local time on February 7.

In a blog about the incident, University of Leiden expert Marco Langbroek said it was unclear how many satellites had re-entered the Earth's atmosphere on February 7.

"Especially the second object is spectacular," he wrote, referring to the shower of debris caught on the SAC video.

"The two objects could belong to one object that has broken up earlier; or be two separate objects close together in the same orbital plane".

It is likely that the satellites will continue to re-enter the atmosphere until mid-February, Langbroek said. They should not, however, pose any threat to people on the ground.

"Starlink satellites are not very big and do not have big rocket engines, so there is very little chance that anything remains and reaches Earth's surface from these reentries: it will all burn up in the atmosphere," he wrote.

While SpaceX has not confirmed whether the object - or objects - caught on camera were its satellites, the company has published an explanation of what went wrong.

According to a blog on SpaceX's website, the 49 satellites launched on February 3 were "significantly impacted" by a geomagnetic storm on February 4, causing up to 40 of them to lose altitude and re-enter our planet's atmosphere.

This is due to a combination of factors. First, Starlink satellites are launched into a relatively low orbit around the Earth so that they will de-orbit relatively quickly in the case of any technical problems, reducing the risk of collision.

However, geomagnetic storms warm the upper atmosphere, causing it to expand and increase drag on objects orbiting close enough - like the Starlink satellites.

SpaceX responded by putting the satellites into a "safe mode" that minimises drag by making them fly edge-on ("like a sheet of paper," as the company put it). But the combination of safe mode and the increased drag left the satellites unable to raise their orbits, condemning 40 of them to a fiery end.

But for some people watching the satellites disintegrate, it was a remarkable event.

"It is one of the most striking and impressive sightings of disintegration observed from Puerto Rico," said SAC science communicator Eddie Irizarry.

"It was very impressive, I saw it from the beginning and it was very different from meteors... I will never be able to forget this event," Juan Velez, an SAC supporter who witnessed the event first hand said.

Is Twitter down? Thousands report outages on the social media giant