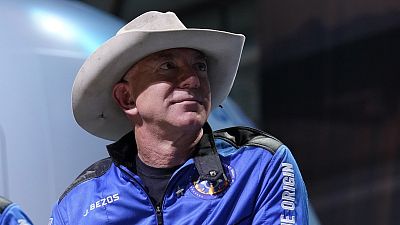 In an open letter, Blue Origin's former head of employee communications Alexandra Abrams and 20 other anonymous current and former employees said that Blue Origin seemed more focused on beating billionaires Richard Branson and Elon Musk to space than on tackling safety issues that would have slowed down the launch schedule for the company’s New Shepard rocket.

In the letter, published on Thursday, the employees also claimed that Blue Origin CEO Bob Smith discouraged staff from voicing their concerns and had managers compile a list of "troublemakers or agitators" among the company’s workers.

In response, a Blue Origin spokesperson rejected the allegations.

"Ms Abrams was dismissed for cause two years ago after repeated warnings for issues involving federal export control regulations," they said in a statement emailed to Euronews Next.

"Blue Origin has no tolerance for discrimination or harassment of any kind. We provide numerous avenues for employees, including a 24/7 anonymous hotline, and will promptly investigate any new claims of misconduct. We stand by our safety record and believe that New Shepard is the safest space vehicle ever designed or built," the company said.

In an interview with US network CBS, Abrams claimed she had never received such a warning.

Sexism at the top

Among the claims of sexism and workplace harassment detailed in the letter, Abrams and the other employees allege that one former Blue Origin executive was protected by “his close personal relationship with Bezos,” eventually being sacked only after allegedly groping a female member of staff.

Another manager, who the letter claims was reported "multiple times" for sexual harassment, was handpicked by CEO Smith to sit on a hiring panel for a senior human resources position.

The letter alleges that Blue Origin’s leadership also brushed off female staff members' worries about safety at the company, saying "concerns related to flying New Shepard were consistently shut down, and women were demeaned for raising them".

Competing with other billionaires - and 'making progress for Jeff' - seemed to take precedence over safety concerns that would have slowed down the schedule.

The letter also offers an insight into Amazon founder and Blue Origin owner Jeff Bezos’ personal goals for the company, which the employees claim were at odds with maintaining safety.

"At Blue Origin, a common question during high-level meetings was, 'When will Elon or Branson fly?' Competing with other billionaires - and 'making progress for Jeff' - seemed to take precedence over safety concerns that would have slowed down the schedule," the letter claims.

On Thursday, the US Federal Aviation Administration said it "takes every safety allegation seriously, and the agency is reviewing the information".

'Be careful with Jeff’s money'

The employees also claim that senior leaders at the company - including Bezos, one of the richest people in history - pushed staff to tackle higher workloads without increasing the available budget or number of personnel available.

This, they claim, led to safety oversights as engineering teams responsible for critical areas like the New Shepard’s engines were overstretched.

In the opinion of one anonymous engineer who co-signed the open letter, "Blue Origin has been lucky that nothing has happened so far".

Despite Bezos' wealth, the employees also alleged that requests for bigger budgets were frequently denied.

"Employees are often told to “be careful with Jeff’s money,” to "not ask for more," and to "be grateful'," the letter states.