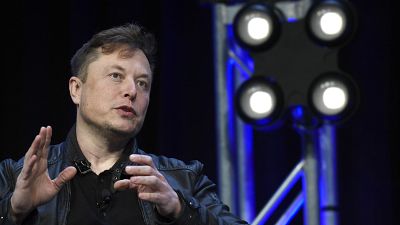 Elon Musk has rejected criticisms that his company’s Starlink internet project is taking up too much room in space, following criticism this week his satellites were involved in near-misses.

“Space is just extremely enormous, and satellites are very tiny,” Musk told the Financial Times, arguing that “tens of billions” of spacecraft could orbit close to Earth.

Musk’s comments follow claims by Josef Aschbacher, the head of the European Space Agency (ESA), that the SpaceX chief was "making the rules" for the emerging commercial space industry.

In comments to the FT, Aschbacher warned that Musk’s plans to launch thousands of communication satellites would reduce the number of radio frequencies and orbital slots available for others.

SpaceX, a private company, has deployed nearly 1,900 satellites to serve its Starlink broadband network and is planning more.

Musk argued his company was not obstructing competition.

“This is not some situation where we’re effectively blocking others in any way. We’ve not blocked anyone from doing anything, nor do we expect to,” he told the FT.

Musk also made the headlines this week after China complained that its space station was forced to avoid collisions with Starlink satellites.

"For safety reasons, the China Space Station implemented preventive collision avoidance control," China said in a document published on the website of the United Nations Office for Outer Space Affairs.

In November, NASA was forced to call off a spacewalk, citing risks posed by space debris. It was unclear where the debris came from but Musk tweeted in response that some Starlink satellite orbits had been adjusted to reduce the possibility of collisions.

2021 in space: This year’s most exciting extraterrestrial stories

The most ambitious telescope ever made is preparing for blast-off