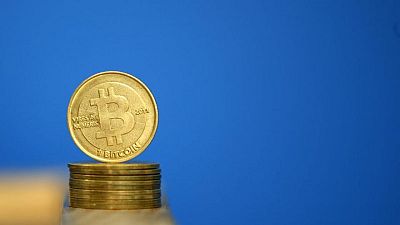 Bitcoin tumbled almost 9 per cent on Monday to its lowest in six months as fears of a Russian attack on Ukraine saw riskier assets worldwide extend their sell-off.

A crisis of confidence in the crypto market showed no signs of bottoming out after it went into a nosedive on Friday with cryptocurrencies across the board plummeting in value.

The US State Department said on Sunday it was ordering diplomats' family members to leave Ukraine in one of the clearest signs yet that American officials are bracing for an aggressive Russian move in the region.

Fears of conflict pummelled shares across the world while bolstering the dollar and oil.

Nerves over the US Federal Reserve's two-day meeting, starting on Tuesday, added to the mix, with the central bank expected to confirm it will soon start draining the pool of liquidity that has supercharged growth stocks.

Smaller cryptocurrencies, which tend to move in tandem with Bitcoin, also slumped. Second-largest digital coin Ether fell 13 per cent to $2,202 (€1,946.51), its lowest since July 27.

Binance Coin, the fourth-biggest token that is issued by the eponymous crypto exchange, was down 12 per cent.

"Bitcoin will face headwinds going back up until the macroeconomic conditions change," said Mark Elenowitz, president of Horizon, a firm that services securities exchanges.

"Generally speaking, when rates are hiked, we could see more sell-offs of seemingly risk-on assets like Bitcoin".