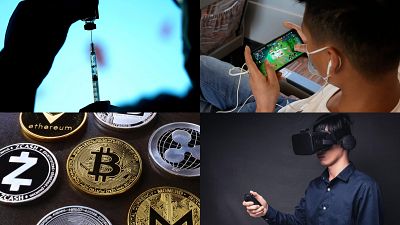 It's fair to say that 2021 didn't turn out quite as many of us had hoped. Not only did the COVID-19 pandemic persist, the newly-uncovered Omicron variant saw lockdowns and restrictions return with a vengeance after months of relative freedom.

Big Tech also faced a public reckoning this year, thanks to revelations that shocked the world and fuelled calls for reform. In China, the tech sector faced a showdown of its own, as the government flexed its muscles.

None of these stories are over, even if 2021 almost is. We hope you'll join us again in 2022 as we follow what unfolds next.

Was 2021 the year crypto went mainstream?

One of the defining tech stories of 2021 has been the rise (and often fall) of cryptocurrencies.

A surge in the value of many cryptocurrencies that began late last year reached a crescendo in 2021, as digital tokens - including Bitcoin and Ethereum - smashed records and surged to all-time highs.

The hype around crypto even helped joke token Dogecoin to surge off the back of comments by Tesla boss and crypto fan Elon Musk.

For some crypto evangelists, Musk turned out to be a false prophet after a tweet rowing back on Tesla's commitment to accepting Bitcoin appeared to help spark a sharp selloff in May.

Searching for the real Messiah, some have turned to El Salvador's president Nayib Bukele. In June, Bukele announced plans for the Central American country to pass a law enshrining Bitcoin as legal tender. He followed through, and in September, El Salvador launched a national crypto wallet - Chivo - which immediately crashed.

While crypto was imposed on the El Salvador mainstream, research released in December suggested that the crypto promise of a democratic, decentralised financial system was little more than a fantasy. Thousands of protesters on the streets of the capital San Salvador agreed.

A study by academics at MIT and LSE found that 27 per cent of Bitcoin belongs to just 0.01 per cent of owners, with the top 10,000 wallets holding some five million of the tokens.

As crypto grew, it drew the ire of the Chinese government which tried to stamp out mining operations across the country. But it wasn't the only tech industry in Xi Jinping's sights.

The country's large mobile gaming sector came under fire from the national government, with accusations in state media that online gaming was "spiritual opium" which threatened to "destroy a generation".

New restrictions were brought in that limited China's under-18s to just three hours of online gaming on weekends and holidays, with a total ban on school nights.

The move seems to have had an effect: gaming giant Tencent said children accounted for 0.7 per cent of domestic gaming time in September this year, down from 6.4 per cent in September 2020.

But the regulatory crackdown didn't only impact Chinese tech companies.

In October, LinkedIn - until then the last western social media platform available in China - bowed to the renewed regulatory pressure and quit the country. It was followed in November by Yahoo and the battle royale online shooter Fortnite.

Do you want chips with that?

Did you want to buy a new games console this year? A new graphics card for your PC? How about a new car? Well, tough luck, because the world didn't have enough semiconductors to go round.

A crisis that had been brewing for some time was tipped over the edge by the COVID-19 pandemic. Production lines that were shut down in 2020 came back to life in 2021, and the global supply of computer chips struggled to keep up.

Huge consumer demand for home electronics like games consoles and PCs, and restarted production lines in the automotive industry, meant that there weren't enough semiconductors to go round.

Carmakers including Volkswagen and Volvo paused production over a lack of chips, while others like Tesla shipped cars that were missing USB ports and wireless charging. The shortage also cut availability of new Playstations, Xboxes and iPhones.

So, will 2022 bring an end to the shortage? Possibly not. In June, the CEO of chipmaker Intel said it could take a "couple of years" to address fundamental issues like foundry capacity, a view backed up by German manufacturer Infineon.

For Facebook founder Mark Zuckerberg, 2021 is a year he may want to forget.

In September, a former Facebook product manager named Frances Haugen leaked thousands of internal documents to the media. Among them were pieces of Facebook's own research suggesting its photo-sharing social app Instagram was harming young girls' mental health.

The company was beset by revelation after revelation, and Haugen toured the globe meeting lawmakers in Europe, the UK and US, calling for Zuckerberg to step down as leader of the company.

"Facebook would be stronger with someone who was willing to focus on safety," she told the audience at Lisbon's Web Summit in November.

Shortly after Haugen's revelations made headlines around the world, Facebook announced it was changing its name to "Meta" in a nod toward its new-found focus on the metaverse.

Just when we thought we were out, COVID-19 pulled us back in.

In the closing days of November, doctors in South Africa raised the alarm over a troubling discovery: a new strain of COVID-19 with an "unprecedented" number of mutations.

As 2021 draws to a close, it's still too early to tell what impact the variant could have. At the time of writing, there is no clear consensus on whether or not Omicron is less lethal than the variants of COVID that came before it.

However, the impact it has had on vaccination programmes is already clear. Booster programmes around Europe have been forced to step up, while the makers of the major coronavirus vaccines have warned that perhaps a fourth dose will be needed.

"We must be aware that even triple vaccinated are likely to transmit the disease…It is obvious we are far from 95 per cent effectiveness that we obtained against the initial virus," BioNTech CEO Ugur Sahin told French media in late December.