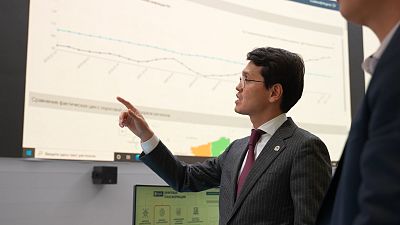 Kazakhstan is marking 30 years of independence. In celebration, politicians and international experts gathered in the capital Nursultan for the "Leadership. Stability. Progress" conference - which focused on the experience of state-building in independent Kazakhstan and the republic's achievements during this time.

The three decades of independence have been an era of sustained economic progress.

In the latest UN e-Government Survey, Kazakhstan ranked 29th for e-government development - and 11th for the quality of online services. The study is conducted every two years and assesses 193 UN member states. It’s a key indicator of information technology development.

Today, Kazakhstan is undertaking a new stage of its digitisation programme - moving on from "quantity to quality" as it restructures its offer to match citizens’ life circumstances. The Ministry of Digitalisation aims to create a multi-platform model for public services - in which people can contact the state through different digital platforms and applications.

“Digital transformation should make it convenient to interact with us, the government,” said Bagdat Mussin, Minister of Digital Development, Innovation and Aerospace Industry. “But we don't put ourselves at the forefront, we put the person who needs to do something concrete at the forefront: move, buy property and so on. And we need to adjust smoothly according to the life circumstances of each person.”

IT training critical to success

Now more than 90 % of public services in Kazakhstan are available digitally, with around 11 million people using them. However, further success depends on there being sufficient high-quality IT personnel.

“For a strong IT sector, the most basic need is human capital,” says Mussin. “That's why one of our major goals for the next four years is to educate 100,000 highly skilled IT specialists.”

Meanwhile, at Nazarbayev University, work on artificial intelligence and robotics is in full swing. Young scientists write applications and algorithms, train robots and study Virtual reality. The goal is to make robots and humans work together. As safely as possible.

“This application is needed so humans can know where it's safe to interact with a robot and where it’s dangerous;” says Zhanat Makhataeva, doctoral student at Nazarbayev University. “Here we can see the red zone is dangerous and the green zone is safe. So the person has more information about where the robot is moving, at what speed it’s moving and how to work with that robot.”

Today, the symbiosis between science and technology is an inherent feature of any sector’s economic development. Kazakhstan, for example, is experiencing explosive growth in markets for which innovation is a key part of business strategy.

“The platform that’s probably the most striking in our sector is the Kaspi.kz platform,” says Kairat Kelimbetov, Chairman of the Agency for Strategic Planning and Reforms of Kazakhstan. “About 11-12 million people use it. Here in this market, they provide payment services. The entire population of Kazakhstan uses them.”

Last year, the financial company Kaspi.kz successfully completed an IPO on the London Stock Exchange and became Kazakhstan’s most highly valued private company. Today, it is a technology giant that operates three platforms: a marketplace, a fintech platform and a payment system.

Another area of Kazakhstan's digital economy is the development of the country's cryptocurrency industry.

After the US, Kazakhstan is the world's second-largest Bitcoin miner. According to Cambridge University, Kazakhstan's share of the total Bitcoin network hashrate is 18.10%.

During its years of independence, Kazakhstan has attracted €325 billion of direct foreign investment. This has enabled Kazakhstan's economy to remain one of the most dynamic in Central Asia and the post-Soviet space.