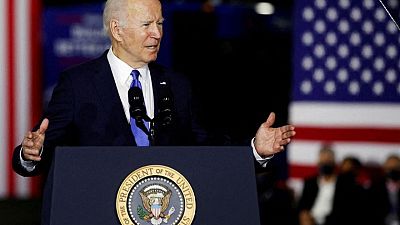 The cables, seen by Reuters, say U.S. government engagements should reflect the goals set in an executive order issued at the start of the year aimed at ending American financial support of coal and carbon-intensive energy projects overseas.

“The goal of the policy … is to ensure that the vast majority of U.S. international energy engagements promote clean energy, advance innovative technologies, boost U.S. cleantech competitiveness, and support net-zero transitions, except in rare cases where there are compelling national security, geostrategic, or development/energy access benefits and no viable lower carbon alternatives accomplish the same goals,” a cable said.

The announcement was first reported by Bloomberg.

The policy defines “carbon-intensive” international energy engagements as projects whose greenhouse gas intensity is above a threshold lifecycle value of 250 grams of carbon dioxide per kilowatt hour and includes coal, gas or oil.

The policy bans any U.S. government financing of overseas coal projects that do not capture or only partially capture carbon emissions, allowing federal agencies to engage on coal generation only if the project demonstrates full emissions capture or is part of an accelerated phaseout.

It exempts carbon-intensive projects for two reasons: they are deemed to be needed for national security or geostrategic reasons or they are crucial to deliver energy access to vulnerable areas.

The policy formalizes the goals set by the administration in earlier executive orders and policy guidances and reiterated in multilateral forums such as the G7 meeting in France in August and U.N. climate summit in the fall.

At the U.N. climate talks in Scotland, the Biden administration pledged with 40 countries and five financial institutions to end new international finance for unabated fossil fuel energy by the end of 2022, except in limited cases.

“The administration has elevated climate change as a core tenet of its foreign policy,” a State Department spokesperson said on Friday in response to a request for comment on the cables. The commitment made in Scotland “will  reorient tens of billions of dollars of public finance and trillions of private finance towards low-carbon priorities, “ the spokesperson said.

Environmental groups said the policy, for which they have long advocated, is a step in the right direction but creates loopholes that could undermine its goals.

“This policy is full of exemptions and loopholes that lack clarity, and could render these restrictions on fossil fuel financing completely meaningless,” said Kate DeAngelis, a climate finance expert at Friends of the Earth.