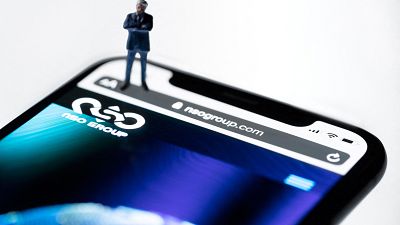 This studio photographic illustration shows a smartphone with the website of Israel's NSO Group which features 'Pegasus' spyware, on display in Paris on July 21, 2021.   -   Copyright  JOEL SAGET/AFP or licensors
By Julie Gaubert  •  Updated: 03/12/2021

Dozens of rights groups are urging the European Union to impose sanctions on the Israeli NSO Group to ban the company’s Pegasus surveillance technology.

In July, a consortium of media revealed that this powerful spyware was used extensively by several governments to spy on lawyers, journalists, political opponents and human rights activists.

Several victims of illegal surveillance have been identified in Hungary, where the government initially denied being a client of NSO Group, before admitting to having purchased the software.

The letter sent the EU was signed by 86 rights groups and independent experts, including Reporters Without Borders, Amnesty International, Human Rights Watch, the Electronic Frontier Foundation and Privacy International., among others.

“There is overwhelming evidence that Pegasus spyware has been repeatedly used by abusive governments to clamp down on peaceful human rights defenders, activists and perceived critics,” Deborah Brown, senior digital rights researcher and advocate at Human Rights Watch, said in a statement.

“The EU should immediately sanction NSO Group and ban any use of its technologies.”

The EU’s global human rights sanctions would allow the EU to adopt “ “targeted sanctions against entities deemed responsible for violations or abuses that are “of serious concern as regards the objectives of the common foreign and security policy”, including violations or abuses of freedom of peaceful assembly and of association, or of freedom of opinion and expression,” “ the letter read.

According to Human Rights Watch, these rights have been “repeatedly violated using NSO technology,” and, as highlighted by the UN Special Rapporteur on freedom of opinion and expression, “the use of spyware by abusive governments can also facilitate extrajudicial, summary or arbitrary executions and killings, or enforced disappearance of persons.”

NSO Group was blacklisted by the US State Department at the beginning of November, and slapped with a sanction that drastically limited the business relationships the US company had with US customers or suppliers, according to the French newspaper Le Monde.

“The EU should unequivocally close its doors to business with NSO Group,” Brown said.

“Targeted sanctions are necessary to that end, and to add to growing international pressure against the company and the out-of-control spyware industry.”

In Europe, several investigations are ongoing, but no sanctions have been formally imposed on the company.

In addition to Hungary, several other countries are, or have been, customers of NSO Group - although this does not mean that all these countries have made illegal use of Pegasus.

In addition to Germany, several EU countries have purchased access to the software, according to Le Monde.