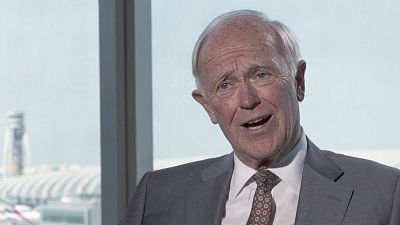 Gleaming new passenger aircraft and their luxurious cabins may have drawn the eye at Dubai Airshow, but what about the people who will staff them?

After most airlines slashed numbers of employees during the COVID-19 pandemic to reduce costs, recruitment is now a priority as rising numbers of customers start to travel again.

Emirates Airline, for instance, is currently on a major recruitment drive and is aiming to enlist 2,500 more people in the next six months, including 600 pilots, 1,200 engineering staff and 700 ground workers.

It follows the company’s previous employment push in September of 3,000 cabin crew and 500 ground staff. But the airline’s president Sir Tim Clark says this latest initiative is meeting significant headwinds.

If you do the maths, you can see the kind of numbers we need to get back to. That's not proving as easy as we thought it might be.

"It hasn't been as easy to just turn the tap back on again and get staff into place,” he explained this week at Dubai Airshow.

"A lot of the pilots have decided to leave the profession. Some of them were in their 50s and probably decided they didn't want to go back for all sorts of reasons. So we're having to work a little bit harder in the onboarding situation for the business cabin crew".

An A380 plane, for example, requires 24 cabin crew and two pilots, Clark explained.

'Slower than we would have liked'

"With 80 of our A380s on the ground at the moment, we have an awful lot of pilots and cabin crew to get into each of these," he said.

"So, if you do the maths, you can see the kind of numbers we need to get back to. That's not proving as easy as we thought it might be. We'll get there. It's just a little bit slower than we would have liked because passenger demand is strong, irrespective of the East still giving us some travel restrictions".

The airline says it has rebuilt almost 90 per cent of its network and Clark says he is "particularly pleased" with its balance sheet and its pace of recovery.

"To be quite honest, I thought we might have seen those figures in the summer of this year, but the Delta variant poleaxed the business and took us back," Clark said.

"What we're seeing now is just the beginning of where we think we're going. We’ll continue to get ourselves back into the pre-pandemic situation by the summer of next year with a bit of luck".

What can space tell us about life on Earth?