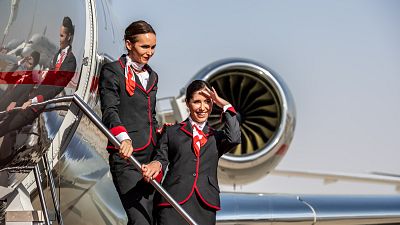 Gender equality in senior roles within the aviation industry is a problem that must be solved, said a leading group for women in the workplace.

"This is not a women’s issue, it’s a society issue. It’s an economic problem we need to sort out and we want more men who will act with us," said Selda Konukcu, Vice President of the International Aviation Women’s Association (IAWA) in the Middle East and Asia, while speaking at the Dubai Airshow.

The International Air Transport Association (IATA) launched its 25by2025 gender diversity initiative in 2019 to improve female representation in senior positions and in areas where women are traditionally under-represented, boosting it by 25 per cent by the year 2025.

More than 80 aviation-related companies have signed up to the campaign.

"Females filling only 5 per cent of CEO roles in the Fortune 500 is the sort of statistic that necessitates the presence of IAWA," said Konukcu.

"We don’t want this organisation to exist, to be honest. But the statistics about women in top management are unfortunate, she added.

"Only 11 per cent of my aerospace engineering class were women," she said at the Aerospace 2050 forum at the Dubai Airshow.

'What matters is an inclusive workspace'

"I did my engineering doctorate programme in the UK and applied for a job. I had a great interview but I didn’t get the job and received no explanation why.

"Months later, I met the guy who got it and he apologised. He said the company told him I was the best-qualified person for the role but they didn’t select me because they thought I might have a baby. It was a big ‘aha’ moment for me".

Konukcu was supported in her mission at the Dubai Airshow by Julie Kitcher, Executive Vice President of Communications and Corporate Affairs at Airbus, who agreed that the aviation industry must do better on gender equality.

"What matters to me is an inclusive workspace, said Kitcher.

"We’ve made progress but we have a lot to do on gender. At Airbus I’m one of three women on the executive committee, that’s three out of 12 – not bad. There is a little less than 20 per cent of women in the company, and less at senior level, so we need to work on gender diversity".