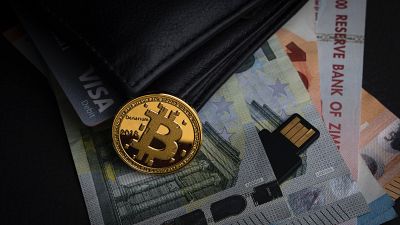 Bitcoin as a completely unregulated means of payment is questionable and very risky making it seem less suitable as a medium of exchange.   -   Copyright  Photo by Aleksi Räisä on Unsplash
By Professor Andreas Rahmatian  •  Updated: 15/10/2021

E-money and cryptocurrencies, especially Bitcoin, have come back into focus. Bitcoin was recently legalised in Ukraine and introduced as legal tender in El Salvador. The question is, are cryptocurrencies currencies or "money" at all?

The question is not a technological one but a legal one. That’s because money is a legal institution, although economists and nowadays even lawyers are generally not very aware of this.

In the modern monetary system, money is a legal debt created by borrowing. This applies theoretically to cash: the banknote is a debt represented in a piece of paper and owed by the central bank to the respective holder.

It also applies in very real terms to the economically far more important bank money, which is the money held in the accounts of commercial banks.

Bank money is created by granting a loan to the bank customer, either through an individual loan agreement or by using a credit card. The sum granted is credited to the customer's account being a "Janus-faced" debt.

On the one hand, the loan remains a debt of the bank customer because the bank does not give anything away, but lends against interest (and can sue and enforce this debt).

On the other hand, the credit sum becomes a circulating credit, i.e. real money because the bank customer transfers the credit sum from his account to the seller to pay for the purchase of a car. The seller can then use the sum received for another purchase.

The creation of Bitcoin is not only ecologically disastrous, Bitcoin is also reminiscent of an old-fashioned gold-backed currency with its technological limit of just under 21 million Bitcoins.

If the bank customer pays off his loan in full, he technically destroys money because he repays the debt that the money represents - not specifically the sum he uses in order to buy the car, but in macroeconomic terms.

Legally speaking, the buyer pays a purchase debt with another debt. It is the law that says this counts as payment. If a customer withdraws all his deposit in his account to obtain cash, the bank's debt to him is repaid and the bank money is converted into cash.

The bank must (ultimately) acquire the cash from the central bank and minimise its credit balance on its central bank account by the amount of cash withdrawn (the central bank's debt to the commercial bank therefore becomes smaller).

This is another reason why commercial banks are interested in cashless payment transactions.

What counts as money and who can create it?

This mechanism of the monetary system is in itself independent of the technology used because the system is a legal construct. What is important is what counts as money and who is allowed to create and issue it. This is ordered by law.

Accordingly, cash can certainly be electronic because the central bank's debt does not have to be represented by a banknote but can exist as a computer record.

This is always the case with bank money; no bank today still writes its accounts in paper books with a fountain pen. Theoretically, a commercial bank could represent its circulating credits operating as money by its own issued banknotes, and until the nineteenth century this did happen before it was abolished (except in Scotland, for example).

Electronic cash is cash because it is created (and held) by the central bank.

Electronic bank money is bank money because it is created (and held) by a commercial bank under the law.

Even if, for example, the crypto-technology Blockchain (as with Bitcoin) were used, this would not change anything conceptually.

The problem is more of a practical nature because customers would then have to distinguish between a bank or credit card (bank money) and a cash card, which would probably be very similar plastic cards.

However, the difference between traditional forms of money and Bitcoin is that money is created and issued by legally authorised banks. In the case of bank money, this legal authorisation is admittedly rather vague and implicit.

Whereas the characteristic of Bitcoin is precisely the elimination of banks as intermediaries, which is supposed to give Bitcoin the appearance of a kind of anarchistic freedom.

Since traditional money today also no longer has any intrinsic value (such as gold), its value consists only in an exchange value, i.e. in the recipient's belief that he or she can exchange the inherently worthless money again for an object with use value.

This characteristic would not differ from Bitcoin, but the necessary belief (bankers like to speak of "trust") is very substantially promoted by the legal authorisation and financial supervision of the banks and the judicial enforceability of the debt called money.

In contrast, the exchange value or faith in Bitcoin as a completely unregulated means of payment is questionable and very risky, making it seem less suitable as a medium of exchange.

Therefore it is largely an object of speculation. Traditional money can be that too (as seen in foreign currency speculation) but this is not remotely comparable to the extreme price fluctuations of Bitcoin, which thus rules it out as a store of value.

Bitcoin thus fails to fulfil two of the three functions of money (medium of exchange, unit of account, store of value). Moreover, Bitcoin does not mean freedom from banks but allows banks to slip under banking supervision by means of subsidiary companies trading in Bitcoin.

Economist Friedrich A. von Hayek called for a free market for currencies in the 1980s but is this unrealistic? The internet, for example, is now dominated by companies like Amazon, Google and Facebook and the cryptocurrency market will develop similarly.

The creation of Bitcoin is not only ecologically disastrous, Bitcoin is also reminiscent of an old-fashioned gold-backed currency with its technological limit of just under 21 million Bitcoins.

There is much to reform about the monetary system, but certainly not through Bitcoin.

Banks and fintechs: A common purpose key to a successful partnership