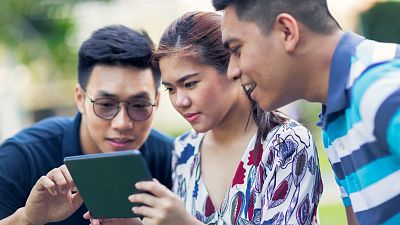 Filipinos are an example of a work-hungry, industrious population waiting to be fully integrated into the global economy   -   Copyright  Canva
The opinions expressed in this article are those of the author and do not represent in any way the editorial position of Euronews.
By Barbara Turley  •  Updated: 14/10/2021

The pandemic has triggered a great ‘working from home’ experiment. Whilst the number of remote workers in the US has steadily been on the rise since 2000, what was once a fringe employment practice has come into the mainstream virtually overnight.

This is a game-changer not only for workers in the world’s richest countries (where the biggest employers with the most lucrative jobs tend to be) but for global employment, and therefore global social mobility in poorer countries.

By breaking down the proximity and visa barriers to employment, businesses can unlock whole new pools of talent around the world. However, for this to work, new systems, management styles and processes fit for the ‘remote world’ need to become commonplace.

The first step is, of course, for managers to realise that remote work works. For years, CEOs have been concerned that working from home (WFH) would lead to a loss of productivity.

But as managers have been forced to relinquish total control over their staff, there does not seem to be very much evidence of that feared loss in productivity.

In fact, several studies conducted in America seem to suggest that remote working has boosted productivity, with those who work from home spending 10 fewer minutes per day being unproductive.

Similarly, a study by Stanford of 16,000 employees suggests that working from home seemed to increase productivity by up to 13 per cent.

However, I believe that we are only at the beginning of this journey. When harnessed properly, adopting a holistic WFH structure can widen any company’s talent pool and allow them to get the most out of their employees.

A strategic opportunity for businesses

This presents a strategic opportunity for businesses. Employers are facing a shrunken labour force, which has invariably driven up wages. In April of 2020, an eye-watering four million people quit their jobs, a phenomenon referred to as the ‘Great Resignation’.

The US is not alone in this, the UK is facing a 20 per cent increase in unfilled job vacancies from pre-pandemic levels. This has invariably driven salaries up; in major cities, graduates straight from university are commanding salaries of up to $120,000.

Businesses do not have to bow to these inflated wages any longer when there is a talented, hungry international workforce waiting for employment.

Cross-border hiring has become a societal norm, as well as an economic necessity. As the saying goes, if you can do your job from anywhere, anyone can do your job. Smart business leaders can, and should, leverage this paradigm shift to their advantage.

That is exactly what is happening, and overall it is a good thing. I have experience working with virtual teams in the Philippines, for example, who have world-class admin skills and near-fluent English literacy, as well as cultural proximity due to being a former US colony.

The Philippines is an interesting test case for an exploding remote work culture; there are already remote working hubs across cities like Manilla and Naga, but I expect this to explode over the coming years.

Firstly, substantial education reforms mean that the Philippines is making remarkable progress; between 2008 and 2015, the net enrolment rate rose from 88 per cent to 95 per cent, and from 60 to 66 per cent in secondary education.

This means that for primary education, the Philippines is on par with the world’s most developed economies, such as the United States.

As essential as education is broadband, and internet penetration in the Philippines is only going one way; as of 2020, 79 million Filipinos had access to the internet, which is over half of the population.

The language barrier is extremely low too. The Philippines is one of the largest English speaking nations, with the majority of the population having at least some degree of fluency.

Filipinos are an example of a work-hungry, industrious population waiting to be fully integrated into the global economy - and remote work is making that possible at a scale unimaginable two years ago. This will unleash a burgeoning middle class, transforming the economy and society.

And the Philippines is just one example; Kenya, Indonesia, Brazil and Saudi Arabia have all been tipped to be talent sources because of their young, digitally savvy workforces and relatively low labour costs.

The great working-from-home experiment has been a success in the West. But it is about much more than British or American managers working from their spacious second homes in idyllic rural locations.

The artificial control of labour flows through work visas no longer has the power to hold economies back. And businesses in industrialised nations will never look back, once they have realised how big the global talent pool is - and how competitively priced it is too.

'Every organisation is evolving': How the corporate world is changing