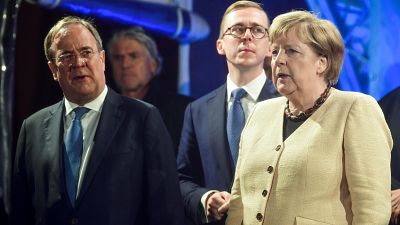 German Chancellor Angela Merkel attends an election rally with Christian Democratic Union (CDU) leader, Armin Laschet in September 2021   -   Copyright  Fabian Bimmer/Reuters
The opinions expressed in this article are those of the author and do not represent in any way the editorial position of Euronews.
By Eoin Drea  •  Updated: 24/09/2021

For a country that has just experienced sixteen years with a female head of government, the current German election campaign has been noticeable for its lack of focus on substantive gender equality issues.

In fact, the current campaign has focused, rather, on the specific personalities of the candidates themselves. The initial enthusiasm for Green Party candidate Annalena Baerbock giving way to Chancellor Merkel’s more open acceptance of the "feminist" label.

A labour market where a very significant proportion of well-educated German women continue to work part-time, remain underrepresented in leadership positions in both the private and public sectors, earn significantly less than their male peers and continue to experience difficulties in accessing affordable childcare options.

However Merkel’s detractors on these issues – and there are many - generally underplay her relative political successes in this area.

Keeping her party unified – the Christian Democratic Union (CDU) and their Bavarian sister party the Christian Social Union (CSU) – in passing legislation for parental allowances, universal childcare and quota’s for female representation are significant achievements. Achievements that can appear modest outside of Germany’s domestic debates on these issues.

Criticisms of the Merkel approach also tend to ignore the ingrained nature of cultural factors in shaping traditional political opinions of the role of working women in Germany.

Merkelism may be seen as a facilitator, but not the driver of change for working women in Germany.

Yet, her advocacy for policies such as universal public childcare provision, earned her significant criticism, especially from within her own political family.

The cultural context cannot be underestimated as a critical element in Merkel’s velvet glove approach. Speaking in 2010, President von der Leyen directly noted the "liberating" effect of living as a working mother in the United States in the 1990s.

The comparison with Germany could not have been more stark. "It was the first time that I was not criticised as a mother for wanting to work or as a professional for having children," von der Leyen said.

For her, the obstacles in Germany presented women with a clear choice - "either they have no children or they emigrate".

Culture matters, especially when it comes to social issues.

Rather, the generally negative perception of Merkel’s commitment to equality comes not from a refusal to acknowledge the issues, but rather from her administration's inability to tackle the underlying structural blockages which mitigate against real equality in the long run, a problem compounded by an uneven and inefficient delivery of existing policies.

Research has shown that the German family-based (ie joint) taxation model benefits couples with unequal earnings. It is a potential deterrent to full-time female employment as it disincentives the employment of the second earner (often the female spouse).

Although both the social (greater equality) and economic (higher labour market participation rates and greater economic growth) basis for reform are clear – this remained too hot a political issue for Merkel to advocate for over the past decade and a half.

Similarly, although all German children have had a legal entitlement to a place in childcare since 2013, the uneven implementation of this policy has resulted in a huge shortage of public childcare spaces, particularly in Western Germany.

Additional federal funding of €5.5 billion by 2022 will attempt to rectify the huge economic cost of parents being forced to remain at home to care for children due to the lack of childcare availability. A further €3.5 billion of funding from Berlin has recently been announced to allow for all day care for primary school going children from 2026.

This funding is deemed vital given the shortcomings evident in childcare provision during the recent pandemic related lockdowns.

Ultimately, the general negative appraisals of Merkel’s impact on gender equality issues underplay, both the embedded conservative nature of Merkel’s internal CDU/CSU political landscape and the wider cultural precedents which remain a drag on reaching real equality for working women in Germany.

However, her incremental reforms – largely spearheaded by the current European Commission President – are still playing catch up with the demands of the younger generations of German women who view services such as public childcare provision and parental leave, not as gifts of the state, but as essential public services.

In this context, Merkelism may be seen as a facilitator, but not the driver of change for working women in Germany. Her biggest legacy may be her strong support for Commission President von der Leyen in reaching the pinnacle of the European Union's decision making elevator in 2019.

As events have since shown, von der Leyen is seeking to be the European agent of change for women's rights that Merkel would never allow herself to be.

'Democracy is under attack' says Merkel at reunification ceremony

German election: What voters expect from the next government