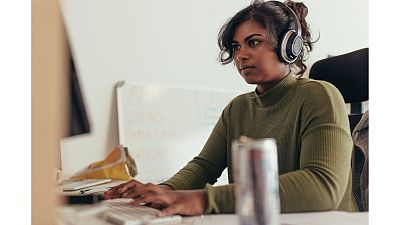 Research firm Gartner estimates that 80 per cent of companies are using monitoring tools to watch over employees working from home   -   Copyright  Canva
The opinions expressed in this article are those of the author and do not represent in any way the editorial position of Euronews.
By Marcus Thornley  •  Updated: 15/09/2021

_The views and opinions expressed in this article are those of the author. _

Hypothetically speaking, if you could somehow reach back through time, contacting yourself in 2019 and providing a summary of the past two years’ events, how much do you think you’d believe? Would you believe that the centre of major cities would be empty at rush hour?

In many ways, the office was a lynchpin of our society. It gave birth to many a relationship, both platonic and non-platonic. Further, with many organisations being involved in a game of one-upmanship with regards to who could create the most impressive HQ, office spaces came to dominate the skyline of our cities.

With this setup came a particular style of work and management. Chiefly, team members coming into the office to work, and managers watching over them as they did. However, with two in five UK employers predicted to embrace hybrid working by 2023, and 85% of workers in the UK stating that they would also like a hybrid approach, it’s clear to see that we are on the verge of a new work order.

Like with any great change, many still maintain doubts. A survey of CEOs revealed concerns regarding productivity, training and career progression.

To mitigate against these supposed risks, many organisations have now implemented some form of employee monitoring software, with Gartner estimating that 80 per cent of companies are now using these tools to watch over their workers.

Two in five UK employers predicted to embrace hybrid working by 2023, and 85 per cent of workers in the UK stating that they would also like a hybrid approach

As the name implies, these programs are used to supervise an employee’s performance and activity over the day, especially when they aren’t in the office. How an employee is monitored varies, ranging from the relatively straightforward – such as monitoring keystrokes or the number of emails sent, to the more Orwellian – biometrically enhanced facial recognition software to track if a worker is looking at the computer screen or not.

In theory, this should protect against a drop in productivity, as the software provides a similar style of ‘supervision’. However, installing the programs on the systems of workers can often have opposite, and unintended effects.

Installing monitoring software can lead to a loss of confidence, resulting in an overall deterioration in the relationship between staff members and company. It isn’t difficult to figure out why.

By mandating that company machines be loaded with ‘spy’ programs, it’s implied that a manager believes their workers are so untrustworthy that they are not able to carry out the tasks associated with their role if they aren’t under the crack of a metaphorical whip.

Given that we’re in the midst of a ‘Great Resignation’ – with 41 per cent of workers planning to leave their current place of work over the next year – companies could lose out in the battle for talent.

Furthermore, if an individual is technologically literate, they could be able to circumvent the programs. Several third-party pieces of software can generate fake keystrokes and other pieces of activity, and if the computer is powerful enough, they could even run a virtual machine, thus rendering the productivity programs meaningless.

Finally, even if neither of the previous scenarios play out, there’s still a chance that productivity doesn’t improve. Take keystrokes as an example - if an employee knows that they’re being measured on the number of keystrokes that they generate, then they’ll embark on activity that will see them increase the number of keystrokes, without any guarantee that this will be meaningful work.

Managing in the hybrid work era

Firstly, and most importantly, management needs to learn to trust their workers. If they are trustworthy enough to be hired, then surely they can be trusted to carry out their role without supervision. Imposing draconian restrictions without justification will only lead to a loss of morale and subsequently productivity.

It’s also necessary for a business to decide what metrics are genuinely key for their productivity. With a sales role, this could be qualified leads, for a journalist this could be the number of articles written.

Focusing on the output, rather than the process will be the most efficient way to improve the productivity of an organisation. Engaging, consumer-style workplace technology products can also help to optimise productivity.

Utilising a game style approach will support workers in creating positive habits which will let them achieve their potential at work. It also provides an employee with the best method of optimising their own work practices.

Management practices must also change. The onus is now on leadership to over-communicate, being very visible in the eyes of their teams, especially now that they will be separated physically. Managers must do all that they can to ensure that messages aren’t lost in translation.

With several changes being implemented in workers’ lives relating to the fundamental structure of the work week, managers need to be prepared to both experiment and be open about the facts.

We’re going through changes in the work world but ultimately, we’re all looking to operate effectively. While no one is quite sure of the final answer, we’ll need to progress with flexibility and trust to ensure a positive future.