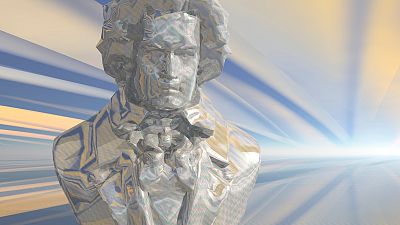 To celebrate the composer’s genius, this year’s edition of the BeethovenFest in Bonn, Germany, offered the public a unique gift: the 10th Symphony completed with extra help from Artificial Intelligence (AI).

Only a few musical sketches of the unfinished piece existed, but a team of international music and AI experts warmed up to add the final notes.

How to teach Beethoven’s creativity to an AI

The project to reconstruct Beethoven's 10th Symphony began in early 2019, instigated by Matthias Röder, the director of the Karajan Institute.

Based in Salzburg in Austria, the institution is dedicated to music technologies, including AI.

Röder put together a team to piece together the scattered parts of Beethoven’s handwriting and imagine the missing parts of the symphony as faithfully as possible to the composer's style.

Among those tasked with completing the work were Austrian composer Walter Werzowa and Professor Ahmed Elgammal, an AI expert from Rutgers University.

"We took these [existing sketches by Beethoven for his 10th symphony] and translated them in MIDI, this music language which we then copied into the AI system," Werzowa explained.

But the AI had too few score elements to generate a complete piece, so it had to learn Beethoven's creative process by revisiting his previous works.

"The AI interpolated because it learned how Beethoven composed, how Beethoven developed, and it gave us methods and variations back," Werzowa said.

The AI analysed how the musical motifs constructed the symphonies, such as the world-famous four-note variation in Beethoven’s Fifth Symphony.

It took two years for the team to complete the work. The COVID-19 pandemic, however, did not help in to respect to the deadline of exact 250th anniversary, which would have been on October 2020.

For Werzowa, it was exciting to discover variations of Beethoven's work each morning, that had been sent overnight by his US colleagues from Rutgers University.

"Because of the time difference, in the morning, I got up early, quite excited and ran to my computer to find hundreds of possibilities which were formulated overnight, well during my night," he said.

"And it was always a beautiful morning occupation, drinking tea and coffee while listening and choosing those Beethoven inspirations".

As for the master computer, no gigantic machine with tons of buttons and keyboards were involved: a simple laptop was used to finish to unfinishable.

"I asked him many times 'please send me pictures' and I was so curious, it's like I imagined like this Star Trek, Star Wars kind of thing, with kilometres of computers," Werzowa told AP.

"He never sent it to me over the two years and finally he did after this whole thing was done. And what he showed me was basically a computer rig which looks like my son's computer rig so it was actually disappointing This is it? This made that amazing work?"

By combining the work of AI and musicians, an initial sample of the 10th Symphony was released with a piano version in November 2019.

The excerpt was played in front of journalists, musicologists and Beethoven experts who had to decide which parts were original or reconstructed.

No one in the audience could spot the difference.

This test was repeated by arranging the score for a string quartet. Same result.

Some critics say the AI was never lovesick, never drunk or neither threw an ice bucket over its head - things that influenced Beethoven’s compositions. But for Werzowa, this doesn't change the music itself and the notes, which are being fed into the AI.

The emotions certainly influenced Beethoven in how to write his masterpieces, but it is his output, the scores that are being analysed by the machine.

The whole symphony was performed for the first time in Bonn on Saturday, October 9, by the Beethoven Orchestra Bonn.