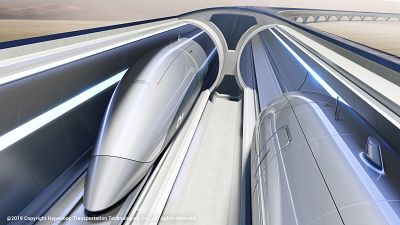 In a little less than 100 years, mankind went from riding horses to spaceflights. Our insatiable desire for discovery and the constant need to travel ensured that the mobility sector saw progress happen at a lightning pace.

Living at a time of innovative new technologies, AI automation, renewable energy advancements and new standards for travelling, we are expecting groundbreaking developments in the upcoming decades that, most likely, will radically change the way we move.

The ongoing effects of the COVID-19 pandemic and the ever-worsening climate emergency are playing a big role in shaping the mobility. For many, including Michiel Langezaal, CEO of Dutch startup Fastned, the future is electric.

"Basically, by 2050 all that's running on something that burns will have stopped," he said.

The company owns and operates a network of EV charging stations across Europe and they deliver 100 per cent green energy, powered either from solar or wind.

"The main focus in, let's say, the next decade, should be on providing the freedom to make a transition to an electric car," Langezaal told Euronews Next.

Yet, Dr Justin Bishop, an economist and former Associate Researcher in Transport Analysis at the University of Cambridge, thinks that the shift to electric might just not be enough to tackle emissions and other environmental damages.

"Switching to electric and hydrogen vehicles addresses emissions at the tailpipe by shifting them up the supply chain," he said.

"However, this can introduce unintended consequences as we have observed with biofuels over the years. Regardless, large amounts of energy and other resources are required if we move from 100 per cent fossil fuel-based transport to 100 per cent electricity/hydrogen or other fuel".

The surge in active travel

For Bishop, achieving the broader sustainability goals must be in opposition to unconstrained growth in energy demand, whatever the purpose. Therefore, with the progress of integrated urban and land-use planning helping to close distances (in other words, the idea of the 15-minute city), we will move to a position where most of the trips will be satisfied maximising active (walking and cycling) and sustainable modes (public transport).

"In my view, behaviour change is the more sure way of travelling while respecting environmental limits," he said.

"In a scenario of global environmental and health crisis, active travel is the best option to move, by far," agreed Dr Esther Anaya-Boig, Researcher in Environmental Policy and Bicycle Mobility Consultant.

Soon, nobody would need to own a vehicle; not in America and neither in Africa. And yes, flight tickets to the moon will soon be affordable to the middle class.

"We’ve observed some redistribution of space in favour of active travel during the lockdown, with the pop-up cycle lanes and widening of sidewalks".

According to Anaya-Boig, the trend will grow but there is still room for improvement. "Just offering space is not sufficient, we know that active travel needs to be safe and comfortable enough to be inclusive".

On the technological side, we still have not evaluated micromobility options, such as e-bikes and e-scooters, enough to know what role they might play, she added.

"Priorities on who gets to use the limited space that we have, and how, are going to determine how active travel develops in the future, and the pandemic could be a turning point," Anaya-Boig said.

For others, mobility as we knew it is dead.

"In the next 50 years, mobility will be 100 per cent shared, on-demand, autonomous, and powered by batteries, fuel cells, and hydrogen," said Adetayo Bamiduro, CEO and Founder of Nigerian mobility startup Max.ng, which connects users to vetted professional motorcycle-taxi drivers via mobile app.

"Soon, nobody would need to own a vehicle; not in America and neither in Africa. And yes, flight tickets to the moon will soon be affordable to the middle class".

In Hyperloop's vision, the transport of the future will be run by smart contracts connected to a Cloud offering travellers the type of transport best suited to their needs. A "human-centred travel experience," as Bibop Gresta, CEO and Founder of Hyperloop Italia, defined it.

People will travel on a network of capsules moving at very high speed in low-pressure tubes articulated above and below the surface of the Earth.

"These will be advanced machines powered by AI, able to serve the greatest number of people on the same route in the shortest possible time to minimise their energy impact, just like modern lifts do," Gresta told Euronews Next.

"The concept of car ownership will gradually disappear".

Going even further, there are those who think that flying from one place to another will be the norm. Christine Wang, Managing Director of Lufthansa Innovation Hub, believes that even autonomous flying will be more accepted.

"Probably, in 50 years from now, we will have figured out how to make air taxis and other emerging technologies, like hydrogen fuel cells, will be more affordable and accessible to the wider public," she said.

That is if we will be still travelling at all.

"It’ll probably arrive, a time when technology around augmented reality will give us a more haptic sensation of a place from the comfort of our living rooms than flying off to your standard vacation," Wang added.