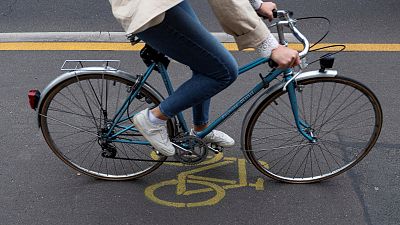 Pop-up bike lanes were one of the positive things to come out of the coronavirus pandemic. As commuters and travellers desperately looked to avoid busy public transport, these makeshift paths dedicated only to two wheels often marked by yellow tape were a quick and simple solution.

In Europe, the concept was first introduced in the Friedrichshain-Kreuzberg district of the German capital Berlin, but it quickly spread to other cities on the continent.

They may look like any other bike path in any other European city, but the pop-up bike lanes in Berlin were groundbreaking. The first one was created in March of 2020 and the initiative to do so came from Felix Weisbrich, a transport official in the district of Friedrichshain-Kreuzberg.

He tells us that the pop-up lanes are what he calls "tactical action". His department doesn't plan forever and think about when they can possibly put their plans into action. Instead, "we go in and make the first temporary steps and monitor how it works", he explains.

Over eight kilometers of pop-up lanes were created at the height of the pandemic and they are now here to stay.

According to the German Cyclists Association (ADFC), bike traffic rose by 25% in Berlin due to the temporary lanes and the pandemic.

On the roads where the pop-up bike lanes were built, the increase in cycling has continued, even as people return to public transport.

Felix Weisbrich calls this the river effect: "If you have a river people won’t swim over it. But if you build a bridge, they will suddenly cross and that’s the same with bike paths."

Other European cities, like Barcelona, Paris and Brussels also expanded their bike path networks during the pandemic, many even creating more than Berlin did.

However, for some in the German capital, there are not nearly enough bike paths.

An Initiative called 'Car Free Berlin' is collecting signatures to force a referendum on making the whole of the inner-city car-free.

Anna Baatz is a spokesperson for 'Car free Berlin'. She loves the new bike paths, she thinks that the city needs them. However, she says that "when you look at the current studies, like the IPCC study, you realise that we don’t have time to just build two or three pop-up bike lanes per year that might someday become permanent."

While Berlin was the first European city to introduce pop-up bike lanes, many major roads in the capital still have no bike paths at all. They are a good start, but in most parts of the German capital, cars still rule.

However, promoting environmentally-friendly mobility is expected to be high on the agenda during this September's federal election in Germany, so cyclists have not said their last word.