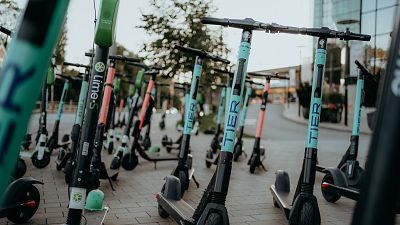 Broken ankles. Cracked ribs. Facial fractures and brain injuries. These are some of the common injuries that prompted doctors in the Finnish capital Helsinki to call for a ban on e-scooters earlier this summer, after they noticed the electric vehicles were involved in a growing number of alcohol-induced admissions to emergency rooms.

Now rental e-scooters operated by companies Voi, Tier and Lime will be subject to a speed limit of 15 kilometres per hour from midnight to 5 am across Helsinki, seven days a week, Finland's Transport Ministry announced on Tuesday.

E-scooters in Helsinki may also see an effective temporary ban at weekends, with Finland's Transport Minister Timo Harakka saying all parties would look at ways to "make the scooters temporarily unavailable" in the coming weeks.

Voi, Tier and Lime would also lower the overall maximum speed of their scooters and actively move the e-scooter supply away from weekend nightlife hotspots, the ministry said following a meeting with the companies.

Earlier this summer Helsinki doctors demanded a weekend night-time ban on rental e-scooters, after they found most injuries were alcohol-related and occurred on Friday and Saturday nights.

Arja Kobylin, an emergency care doctor from the Helsinki and Uusimaa Hospital District (HUS) that covers the Finnish capital, told Euronews Next that she was "not satisfied" with the outcome of the Transport Ministry's meeting with the scooter operators, as a concrete ban was not put in place.

"I would still like to see a ban because most of the accidents really do happen during night-time at weekends," she said.

According to Kobylin, HUS's Meilahti hospital was forced to hire an additional emergency room doctor this summer as e-scooter related injuries placed an additional burden on weekend medical staff.

"These injuries are very much more severe than bicycle injuries," she said.

"When people crash down from the e-scooter they hit their head. The brain injuries can be very severe".

Speaking to Euronews Next before the new measures were announced, transport minister Harakka acknowledged the scale of the problem, but said a full ban would be excessive.

"The number of accidents has not decreased as desired and we are aware that e-scooter accidents burden health care too much.

"It should be noted, however, that a categorical ban on some form of mobility could be too stringent a measure. Instead of a categorical ban, we should consider more effective supervision, technical solutions and other possible restrictions," he said.

Authorities in Finland's Nordic neighbour Norway took a more aggressive approach earlier this year. In July a ban on night-time e-scooter rentals was announced in the Norwegian capital after doctors at Oslo University Hospital (OUS) raised the alarm.

"We probably do not have a single activity at the moment that is the cause of as many injuries as electric scooters," OUS chief doctor Henrik Siverts told a press conference in July.

These include extending the new speed limit to cover the whole of Helsinki seven days a week, physically moving e-scooters away from nightlife hotspots and implementing in-app fixes like a mandatory, slowed-down "beginner mode" and a reaction time checker.

"We want to highlight for our users how it's very important for them to understand that alcohol and e-scooters are not a good match, you should never drive while you're intoxicated," she said, stressing that driving while drunk was against Voi's terms of service.

"What we would propose is that we would be willing to limit the supply of e-scooters in these bar dense areas. Not blocking the service, but actively rebalancing the scooters out".

Both Alastalo and Tier Finland manager Elina Bürkland told Euronews Next that the companies would like to see legislative changes and increased policing that would make the risks of e-scooting while drunk more clear to users.

The third e-scooter rental company operating in Helsinki, Lime, did not respond to a request for comment.

Both companies also said that the number of accidents in Helsinki was already decreasing after weekend e-scooter speed limits were lowered in July.

"The lower speed limits have been in place for 6 weekends now and it appears that the amount of accidents and the severity of the injuries have slowly decreased," Bürkland said.

HUS doctor Kobylin accepted that accident numbers had fallen in recent weeks, but said the speed limits may not be the only factor.

"I think that it's mostly because the weather is getting cooler and maybe people are more aware of the risks of driving drunk, thanks to the media attention. We didn't see a decrease in the accidents for several weeks after they limited the speeds," she said.

"I'm not satisfied with the conclusion of the meeting they had yesterday. Now it seems that we have to wait for the next summer and see the rising numbers of the e-scooter accidents in our ER".