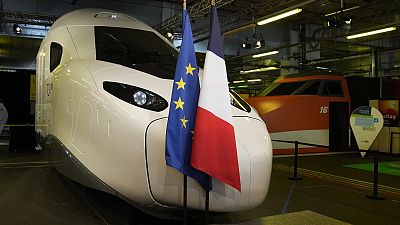 Almost 40 years to the day since the first TGV rolled into service from Paris' Gare de Lyon, the new generation of France's iconic high-speed train was unveiled by President Emmanuel Macron at the same station on Friday.

Its fortieth anniversary and the arrival of the TGV M come as the race to produce the best high-speed railway heats up around the world.

The first engine of the new train, which will not officially enter service until 2024 in time for the Paris Olympic Games, was first presented at a press conference on May 26 at the Belfort factory in eastern France.

Compared to the previous versions, the stylistic evolution is obvious. The front of the train has a reptilian profile somewhat reminiscent of the Japanese Shinkansen.

The inspiration for the new design is undoubtedly also of an entomological nature, as evidenced by the black headlights and the large glass surface of the cabin, reminiscent of a hornet or a wasp, except that the yellow of the insect is replaced by an immaculate white.

But aesthetic considerations were probably not the main reason. According to its manufacturer Alstom, the sharp aerodynamics of the new TGV enables it to "consume 20 per cent less energy and reduce its CO2 emissions by 32 per cent".

Named "Avelia Horizon" by Alstom, the new train has been called the "TGV M" by French railway operator the SNCF, "M" being for modern and modular.

Unlike previous incarnations of the TGV, It will be possible to adjust the size of the trains according to requirements by adding or removing cars as needed. The same applies to the interior of the cars, where the spaces can be quickly reconfigured.

The "TGV M" will be 97 per cent recyclable, compared with 90 per cent for current generations. The SNCF, which participated in its development, also estimates that its maintenance costs will be 30 per cent lower.

In July 2018, the SNCF ordered one hundred of the new trainsets from Alstom for €2.7 billion. The first trains will be operational at the end of the first quarter of 2024. Deliveries will be made until 2031.

The top speed of this fourth generation of TGV will be the same as that of the current equipment which is 320 km/h. However, this new high-speed train will be able to carry 20 per cent more passengers, accommodating up to 740 people per train in its maximum configuration, compared with 600 today.

No TGV without LGV

Rail travel is having somewhat of a renaissance in France just now. Previously unprofitable night trains are making a comeback, with the service between Paris and Nice have, for instance, returning in May after a three-year absence.

There are also significant new high-speed rail projects progressing in tandem with the TGV M's manufacture.

Of the 30,000 km of track on the French rail network, 2,800 km are high-speed lines, or lignes à grande vitesse (LGV). The Nîmes-Montpellier bypass is the latest section to be opened in July 2018. Funding for two new lines, Bordeaux-Toulouse and Marseille-Nice, has recently been agreed upon, but no delivery date has been given.

The "TGV-M" will not be exclusive to France. Its designers at Alstom hope to see it run one day in other European countries where open competition between operators is at full throttle. In May, for instance, the SNCF launched its low-cost Ouigo TGV service in Spain on the Madrid-Barcelona line.

As for Alstom, the company previously sold a past evolution of the TGV to a private Italian operator. Since 2012, Italo has been operating 25 AGV trainsets, the specificity of which lies in the fact that the train's motorisation is distributed throughout the trainset rather than in a power engine.

Italo remains the only client for the train. Apart from this contract, the AGV has not found any other takers.

On the continent, competition on high-speed lines is tough. And the development costs mean that many companies have had to form alliances to achieve their goals and see their designs roll out off the production line.

In the past, for example, Bombardier joined forces with the local company Talgo in Spain to produce the S-102 and S-103. In Italy, the Canadian manufacturer partnered with AnsaldoBreda to produce the ETR 1000.

Today, progress is being made in Germany with the development by Siemens of its future high-speed train, christened Velaro Novo, which will be capable of reaching 360 km/h. Siemens has produced various ICE models for the German railway company, Deutsch Bahn. In Spain, Talgo is continuing to develop its Avril design, 15 trainsets of which are to be delivered to Renfe, the Spanish railway company.

Outside Europe, the market where high-speed trains are developing the most is China. The Chinese high-speed rail network already covers more than 38,000 km, almost 10 times more than Spain, which is in second place with just over 3,300 km. As far as rolling stock is concerned, the local manufacturer CRRC reigns supreme with its Fuxing range of models.

In Japan, the latest generation of the famous Shinkansen bullet trains, the N700s, developed by a consortium including Kawasaki and Hitachi, began its commercial career last July.

Despite its short career, and the fact it is capable of reaching speeds of 370 km/h, the N700 won't even be able to compete with the latest evolution of Japanese high-speed trains already in progress. While still in testing, the L0 series, based on magnetic levitation technology, or maglev, reached 603 km/h back in 2015, five full years before the N700 even reached service.

But even the fastest trains are in danger of being dethroned by a competitor from the United States that promises speeds of over 1,000 km/h. The now-famous Hyperloop project, led by Elon Musk and based on capsules travelling in tubes where the air is under low pressure, is still in its infancy.

But it is off to a promising start, attracting the SNCF as a shareholder in what was then Hyperloop One in 2016. This company has since been renamed Virgin Hyperloop following its takeover by British billionaire Richard Branson.

The first tests with passengers were carried out "successfully" in November 2020, according to the company. The capsules used have so far only reached a modest 172 km/h so we will have to wait a while longer for the promise of rail travel at speeds of 1,000 km/h to materialise.

Why French students and Thomas Pesquet are getting excited about Blobs