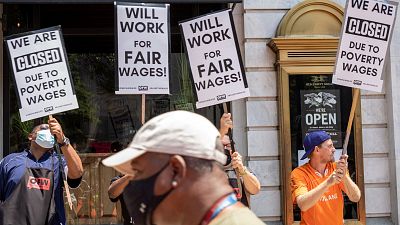 US restaurant workers protested over low pay this year, demanding to be paid the minimum wage plus tips.   -   Copyright  AFP
By Tom Bateman  •  Updated: 27/08/2021

The UK's tax office has revealed the ten most "absurd" excuses employers gave for not paying their workers the minimum wage.

One employer said "it is part of UK culture not to pay young workers for the first three months," while another claimed the National Minimum Wage simply did not apply to their business.

Another said their workers were merely "on standby" when there was no one in the shop, and only got paid when they were serving customers.

By law, workers in Britain must be paid at least the minimum wage for their age group. The amount currently ranges from around €5.40 an hour for under 18s to €10.45 an hour for those over 23. Apprentices aged under 19 earn around €5 an hour.

Being underpaid is 'no joke'

One employer's excuse to HMRC

During the 2020-21 tax year, UK tax authority HMRC said it helped more than 155,000 workers recover more than £16 million (€18.7 million) in unpaid wages, and handed out fines worth more than €16.4 million to unscrupulous employers.

"Being underpaid is no joke for workers, so we always apply the law and take action. Workers cannot be asked or told to sign-away their rights," said HMRC's director for individuals and small business compliance, Steve Timewell.

"HMRC reviews every complaint made about the minimum wage, so if you think you are being short-changed, or are a business that is unsure of the rules or needs help to get things right, get in touch and we will help you".

Here are the ten "most ridiculous" excuses HMRC got for not paying workers the minimum wage.

1. "She does not deserve the National Minimum Wage because she only makes the teas and sweeps the floors".

2. "The employee was not a good worker, so I did not think they deserved to be paid the National Minimum Wage".

3. "My accountant and I speak a different language – he does not understand me, and that is why he does not pay my workers the correct wages".

4. "My employee is still learning so they are not entitled to the National Minimum Wage".

5. "It is part of UK culture not to pay young workers for the first three months as they have to prove their 'worth' first".

6. "The National Minimum Wage does not apply to my business".

7. "I have got an agreement with my workers that I will not pay them the National Minimum Wage; they understand, and they even signed a contract to this effect".

8. "I thought it was okay to pay young workers below the National Minimum Wage as they are not British and therefore do not have the right to be paid it".

9. "My workers like to think of themselves as being self-employed and the National Minimum Wage does not apply to people who work for themselves".

10. "My workers are often just on standby when there are no customers in the shop; I only pay them for when they are actually serving someone".

Some campaigners in the UK argue that the government-mandated minimum wage isn't high enough.

Research published in July by the Living Wage Foundation, which campaigns to raise the minimum wage in the UK, found that 3.7 million British workers earned less than what it calls the "real" living hourly wage of £10.85 (€12.75) in London and £9.50 (€11.15) elsewhere.

The research found that young people, ethnic minorities and people with disabilities were more likely to be in low-paid, insecure jobs than the average British person.

17 per cent of workers under 25, 13 per cent of black and minority ethnic (BAME) workers and 15 per cent of disabled workers were affected by insecure, low paid work, compared to the overall national figure of 12 per cent.