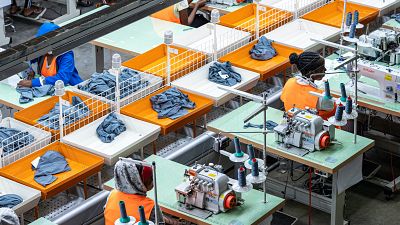 Workers operate sewing machines at a factory in Ethiopia in 2019. Photo taken pre-pandemic, before the study was carried out.   -   Copyright  EYERUSALEM JIREGNA/AFP
By Tom Bateman  •  Updated: 23/06/2021

Workers in the garment industry faced worsening conditions during the COVID-19 pandemic, a new study has found.

Workers at clothing factories in Ethiopia, Honduras, India and Myanmar faced higher rates of unpaid wages, violence, threats and even bans on using the toilet at work in the last year, the study published this week by Sheffield University said.

The conditions employees faced were a direct result of the way global supply chains in the clothing industry work, the researchers found.

Lead author Professor Genevieve Le Baron told Euronews Next there was a risk that the negative shifts in working conditions could be permanent.

"Workers have been plunged into severe economic desperation, their rights are being eroded, there's been layoffs of unionised workforces, all sorts of things have happened in the supply chain. I think it's very unlikely those dynamics will be reversed," she said.

What did the study find?

Workers in the countries the study covered saw an average 11 per cent drop in wages compared to pre-pandemic levels.

One worker in India explained the position many found themselves in, saying "we are here basically to earn and survive. There are thousands of migrant workers like us. So we have to cope with whatever issues come up."

According to Le Baron, the deterioration in working conditions was set off by the way household name brands in developed countries responded to the economic hit of the pandemic.

"We saw cancellations of orders, we saw refusal to pay for goods that suppliers had already produced, we saw the whole domino effect that big brand companies kind of unleashed within their supply chains. And these trends have resulted very much from that," she said.

One anonymous company representative interviewed by the researchers put it more bluntly.

"When this crisis hit, the kind of knee jerk reaction of [multinational corporations] was indeed to cut and run for the hills, leaving, yes, a huge amount of disruption in the aftermath," they said.

A 'ticking time bomb' for the future

Le Baron told Euronews Next that the experience of garment workers during the COVID-19 pandemic set a worrying trend for people at the bottom of other supply chains around the world.

"We have seen generally a big deterioration in conditions across many supply chains,” she said.

"This is the only study that I'm aware of that has such in depth interviews and engagement with workers, so we don't have similar research for other sectors that are so comprehensive but. My intuition is that we would see similar things if we did."

Earlier this week a German trade union called for workers at Amazon distribution centres in the country to strike over issues including the increased workload resulting from the pandemic.

Another long term issue could be the rise in household debt among factory workers, a greater number of whom took on loans to cover a loss of earnings during the pandemic.

"We have a ticking time bomb," Le Baron said.

"We've uncovered that there's already a spike in forced labour but my concern would be that six months or a year down the line, if we followed up with these workers, it's actually the debt that ends up being the thing that drives them into this really downward spiral of working conditions."

Euronews Next contacted the companies mentioned in the report for comment.

Tesco said it did not tolerate abuse in its supply chain. The company told Euronews Next it conducted checks of suppliers to ensure workers were being treated fairly.

In response, Nike sent a link to a webpage highlighting the brand's values.

"We expect all suppliers to share Nike’s commitment to respecting the rights of workers and advancing their welfare, with particular care for people with unique vulnerabilities such as women, migrants, and temporary workers," it said.

The other companies had not responded at the time of publication.