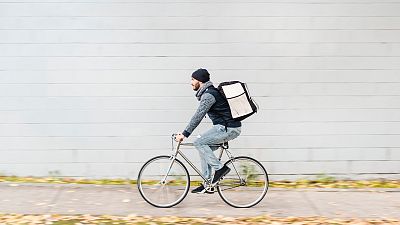 A new report from Oxford University has called for stronger protections for gig workers in the UK as it found many end up earning less than the legal minimum wage.

The Fairwork UK report published by the Oxford Internet Institute found that only two of the country’s eleven most popular gig work platforms guaranteed their workers would earn more than the minimum wage after costs.

Top of the board – and the only company to score more than five out of ten – was bike courier service Pedal Me with a score of eight. Cabshare giant Uber and its food delivery spinoff Uber Eats each scored two points. Amazon's courier service Amazon Flex and cab companies Ola and Bolt all scored zero.

In a statement, Amazon said Amazon Flex was intended principally as an opportunity for people to supplement other earnings.

"Amazon Flex offers people the opportunity to make great earnings of £13 to £15 (€15-17) an hour to supplement other incomes working on their schedule to deliver Amazon parcels," the company said.

Study co-author Dr Alessio Bertolini said the report was the first time taxi, food delivery, courier, and domestic services apps had been graded on how well they treat their workers.

"This provides a helpful guide for customers who use these platforms and the businesses that work with them,” he said.

“In this UK report, we found Pedal Me the highest-scoring platform as it offers all its workers an employment contract, entitling them to many employment rights from which UK platform workers are typically excluded".

These platforms are using new technologies to carry out the age-old practice of worker exploitation.

While Pedal Me and delivery service Just Eat earned praise for guaranteeing a minimum wage for their workers, the report highlighted that not one of the platforms could offer workers the chance to earn the local living wage after costs.

"This is most often due to the significant amount of unpaid waiting time workers experience when working," said Oxford researcher Dr Matthew Cole.

A 2017 study by the UK's Office for National Statistics found that 4.4 per cent of the British workforce – or roughly 2.8 million people – were employed by app-based platform services. That number is likely to have grown, particularly in the wake of the COVID-19 pandemic.

One Deliveroo rider quoted in the report claimed the company took advantage of the large number of people looking for gig work.

"The ratio of orders between riders have to be enough for us to work enough and earn enough. When they go on a hiring spree, they just make the new riders undercut existing riders’ pay. Deliveroo dominates the media and says ‘we're creating 15k jobs’ but actually they’re driving wages down," he said.

Not all gig workers impressed by the findings

Despite this, the company received a rating of five out of ten, with the report praising its efforts at ensuring equitable treatment for workers on its platform and "evidence that they provide a fair system of due process for decisions affecting workers".

Alex Marshall, president of the Independent Workers Union of Great Britain, which represents workers in the gig economy, disputed the report's findings on Deliveroo.

"Our evidence points to the exact opposite of this. The IWGB Couriers and Logistics branch regularly deals with cases of deactivation where workers have no fair process," he said.

Marshall also criticised the methods used to produce the report.

"The methodology does not include speaking to collective worker organisations or representatives – despite “fair representation” being a key component of the score. This is a serious oversight for any research into digital platform work," he said.

"These platforms are using new technologies to carry out the age-old practice of worker exploitation," she said.

In February, the UK's Supreme Court struck a blow against the gig worker model when it decided that Uber's workers – who the company argued were self-employed contractors – were entitled to the rights and protections of worker status.