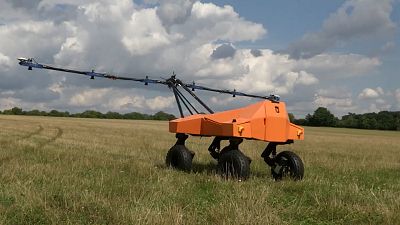 It’s easy to see why robots are an enticing prospect as farm labourers - they’re diligent, methodical and don’t break a sweat.

And while they don’t come cheap, their manufacturers claim that they may also help farmers lower costs and reduce the use of fertilizers and pesticides.

"He is essentially creating a per plant view of the entire field, recognising every single plant in a field, giving each plant an exact location, and then using that to build what we call per plant intelligence," Sam Watson Jones, Small Robot Company’s founder and president, said.

"We're gathering all sorts of different data points about each plant. So, what's its health status? What's its nutrient status? Is it a crop plant or is it a weed?"

Watson Jones’ company is part of a new wave of agri-tech companies looking to find solutions to alleviate economic strains the sector has been under in recent years.

The industry is contending with uncertainties over climate change, a rising global population and market pressures to keep food cheap.

"The productivity of farming is not increasing for the world's major food crops. So, unless something changes about that system, lots of farmers are going to go out of business," said Watson Jones.

Ali Capper, who chairs Britain’s National Farmers Union agrees that robots have a role to play in securing the future of farming in the UK.

"I think farming is just like any other manufacturing sector. I mean, we are a factory without a roof, effectively," she said.

"And so, I think like every other manufacturing sector, we will always want to adopt and innovate and do whatever we can to drive up productivity, to produce more from less".

Is Boston Dynamics’ parkour performing robot fitter than you?