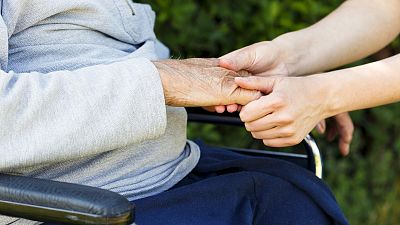 Researchers have for the first time found that it’s possible to use a synthetic thyroid hormone to regulate a gene that is linked to neurodegenerative diseases like Alzheimer’s, Parkinson’s and multiple sclerosis.

The findings from a new study carried out by the Oregon Health and Science University, which included tests on cells and mice, were published on Thursday in the scientific journal Cell Chemical Biology.

Most neurodegenerative diseases like Alzheimer’s do not have any approved cures and are simply managed by palliative care.

The study raises a new possibility that medication can be developed to treat these kinds of neurodegenerative diseases in the future.

This latest discovery builds upon a 2013 publication which links variants of TREM2 - a gene that provides instructions on producing proteins - to the risk of Alzheimer’s disease.

"TREM2 is a receptor," Dr Tom Scanlan, the study’s senior author and a professor of physiology and pharmacology in the OHSU School of Medicine, said.

"It senses damaged cellular debris from disease and responds in a healing, productive way. The thought is, if you can simply turn up its expression, then that's going to lead to a therapeutic effect in most neurodegenerative diseases".

"The possibility of doing clinical trials is not millions of miles away. It would be an achievable thing.

The latest findings from the OHSU show that it’s possible to turn on TREM2 expression and the TREM2 pathway by using a compound that was originally developed more than 20 years ago to lower cholesterol.

Researchers administered an analog of the compound that penetrates into the central nervous system of mice. They discovered that they were able to increase the expression of TREM2 and reduce damage to myelin.

Myelin is the insulation-like protective sheath that covers nerve fibres. In disorders like multiple sclerosis, a person’s immune system attacks the myelin sheath which causes inflammation and injury to the sheath and ultimately the nerve fibres that it surrounds.

The pathway activated by the TREM2 gene is also linked with neurodegenerative diseases, including Alzheimer’s and Parkinson’s.

"This is the first example reported that shows it’s possible to increase the expression of the TREM2 gene in a way that will lead to healing in certain diseases," Scanlan said when discussing the significance of the paper.

"This will generate a lot of excitement".

Neurodegenerative diseases, which impair the function of the brain and central nervous system, represent one of the greatest therapeutic challenges in modern times.

With an estimated 60 million people suffering from neurodegenerative diseases worldwide, the number is expected to double every 20 years as the average age of the world population increases.

The synthetic thyroid hormone compound, known as sobetirome and similar analogs, is already licensed to be the subject of clinical trials for central nervous system diseases, including multiple sclerosis.

Compared to other scientific discoveries in mice, Scanlan explained that this new discovery links this class of compounds to Alzheimer’s, Parkinson’s, and other neurodegenerative diseases, advancing the science much closer to clinical trials in people with these debilitating diseases.

"The possibility of doing clinical trials is not millions of miles away," Scanlan said.

"It would be an achievable thing".