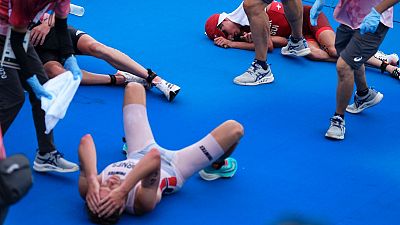 Tokyo 2020 is likely to go down in history as the hottest modern Olympic and Paralympic Games ever.

Daily high temperatures in the Japanese capital have hovered around 31C throughout the Games, according to data from the Japan Meteorological Agency, and an average relative humidity of around 80 per cent has made the heat all the more punishing.

"Although this will be the hottest modern Olympics to date, it is not unusual. We had really challenging thermal conditions in Athens and Beijing," Dr Lee Taylor, reader in exercise and environmental physiology at the UK’s Loughborough University, told Euronews Next.

Preparing for high temperatures is standard practice for the world's elite athletes. When a gold medal can be decided by fractions of a second, it's not an option to accept the 10 to 15 per cent drop in performance that extreme heat can cause in some events.

Training for the Olympics is a long-term commitment. Training schedules can begin some six or even 12 months before the Games open, and long before nations have finalised their teams.

"At the beginning of that you'd do a really robust, one-week to three-week heat acclimation or acclimatisation camp," said Taylor.

"You get a little bit of cash in your pocket, so to speak, so when you re-acclimatise, you spend less time. You save time and resource closer to the Olympics".

That early investment in training the body to perform at higher temperatures is an example of long-term heat preparation.

During the pandemic, athletes have had to adapt, training in cooler conditions and then climbing into a sauna or hot bath directly afterwards.

British cyclist Tom Pidcock, who won gold in the men's mountain bike race, trained in a heated tent he set up in his spare bedroom.

"Basically, at the end of training I jump in a heat chamber for 30-45 minutes and sit in a really hot box pedalling very slowly. My spare room has a tent in it," he told Reuters.

"It keeps tripping the electricity actually, that's the only problem".

Despite the preparation, consistently high temperatures at Tokyo 2020 have still had a visible impact on some events.

Spanish tennis player Paula Badosa suffered heatstroke during her quarterfinal match, and had to be taken off the court in a wheelchair, while men's tennis number two Daniil Medvedev visibly struggled with the temperature.

"I can finish the match but I can die," Medvedev told the umpire. "If I die, are you going to be responsible?”

If the worst happens and an athlete suffers severe heatstroke, what happens next is up to the Tokyo 2020 Adverse Weather Impact Expert Working Group, a group of experts devoted to tackling the issue of heat at the Games.

In cases of heatstroke among Olympic athletes, the first thing organisers do is cool them down before seeking further medical treatment, explained Yuri Hosokawa, a professor of sports science at Tokyo's Waseda University who is part of the working group.

"For those who are used to trauma care, this may sound counter-intuitive because you usually rush to transport an injured patient to the hospital, but in the case of exertional heat stroke we do not want to lose time for rapid cooling- sustained hyperthermia during transport will continue to damage their body," she told Euronews Next.

"The rule of thumb is cooling the body within 30 minutes of collapse. Therefore, aggressive cooling is implemented on-site before transfer to the hospital for follow-up care."

If you've watched the Olympics on TV, you've probably seen some of the tools used by the athletes and their teams to keep the heat at bay during events.

"We look to complement the long term heat acclimation with race or match day cooling and hydration, so that can involve ice towels, ice socks, ice vests, cold water immersion, dousing - which is pouring water over your head - there's a whole host of things that can be done," Taylor said.

But in the world of elite sport, even these short-term cooling techniques have to be planned meticulously and introduced into competitors' routines over a long period.

"During that long-term and medium-term prep you're looking to pilot these interventions relating to food and hydration, so you'd never just suddenly go 'I'm gonna ingest a shedload of ice slurry' on race day and you've never done it before," Taylor explained.

"We generally want a menu of options that are well-piloted with our athletes so we can take the temperatures on race or match day and say, OK, which of these do you want to do?"

Tokyo's original pitch to host the XXXII Olympiad – which it won in 2013 – promised "many days of mild and sunny weather," a claim that has since drawn criticism for playing loose with the truth.

In reality, extreme heat has long been a concern for these Games. The last time the Olympics came to Japan, in 1964, they were held in October.

In 2019, local organisers and the IOC took the unprecedented step of moving the marathon and race walking events roughly 800 km north to Sapporo, in an effort to escape the highest temperatures.

Timings of some events like tennis and the triathlon were also adjusted to avoid the hottest times of day.

Before COVID-19 forced the decision to hold Tokyo 2020 behind closed doors, there were even plans to use snow stored during the winter and imported from Japan's famed ski resorts to cool down spectators.

But while the stands have remained largely empty, some of the Games' 110,000 volunteers have been provided with a high-tech solution to heatstroke: an intelligent earpiece that monitors their risk of heatstroke and sends warnings via an app.

The earpiece, made by Chinese tech firm Alibaba, tracks the body temperature and heart rate of staff. It then combines that information with the so-called environment index, a cloud-based dataset that brings together information on temperature, humidity and the strength of the sun from sensors set up at 14 Olympic venues.

"The app presents alerts of 'warnings' and 'severe warnings' even when I haven't noticed myself. I think it's useful in terms of heatstroke prevention," 21-year-old Olympic Stadium volunteer Mikako Takahashi told Reuters.

Looking beyond the Tokyo 2020 Olympic and Paralympic Games, both Hosokawa and Taylor agree that high temperatures are going to become an ever-greater issue for major sporting events.

"We've seen events over the past decades and prospective decades are going to be held in continents and countries where they've never had it. Sport is truly becoming global," Taylor said.

"However, that means we'll be competing in places which are generally hot and humid".

In Tokyo, COVID pushed the business interests of the Games into conflict with public health concerns. For Hosokawa, the priority is avoiding a similar conflict sparked by rising global temperatures.

"Global warming will definitely change the way of our physical activities and when we schedule major sporting events," she said.

"I think in coming years, international federations will need to agree on an environmental condition where it would automatically mean a cancellation, that is independent of the influence from media, politics, and business-related decisions".