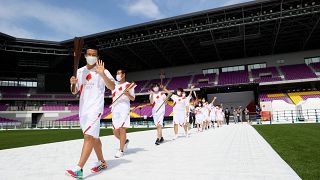 The Olympic and Paralympic Games aren’t just a showcase for the greatest sporting talent on the planet - they are also a platform for emerging technologies helping to create a more sustainable future.

Under the banner 'Be better, together – For the planet and the people', the Games’ organisers aim to promote a circular economy that will benefit Tokyo’s 14 million residents well into the future.

According to a recent report from Harvard University, “by using circular economy strategies, which seek to maximise resource reuse and minimise waste, Tokyo 2020 may be able to achieve both goals simultaneously.” The resulting benefits are a more sustainable environment, long-term cost savings, and a more content population, it says.

“We have continued with these efforts even after the postponement of the Games, and one of the legacies of these Games will be that they have prompted us to think about what a sustainable society is and how our individual actions can change to help achieve it.”

Tokyo 2020 has pledged to be ‘net carbon zero’ by reducing energy, resource consumption and minimizing construction. Where it hasn’t been possible to use renewable energy, green power certificates will be used to compensate for the use of non-renewable electricity.

The Games plans to compensate more than 100 per cent of its remaining emissions by acquiring carbon certificates from over 200 Japanese companies that have implemented reduction measures. The carbon offsetting programme covers all direct and indirect emissions related to the Games, including construction and transport.

When it comes to where the events will be held, Tokyo 2020 is also leading the way by resuing as many existing buildings as possible. Of the 43 competition venues, 25 were already in use - some of them dating back to the 1964 Olympic Games. Many of these existing locations have also been retrofitted with advanced building technologies to reduce energy consumption.

It isn’t just venues that will be reused either. Precious metals have been salvaged from nearly 79,000 tonnes of smartphones and other electronic equipment donated by the Japanese public. Known as ‘urban mines’ they have been used to make the 5,000 Olympic and Paralympic medals.

The medal podiums are made from recycled domestic plastic waste as part of an initiative by consumer goods giant P&G, a Worldwide Olympic Partner. Even the Olympic torch was produced using aluminium from temporary housing built in the aftermath of the 2011 earthquake.

As the organisers point out in the recently-released update to the pre-Games sustainability report, “by showing the world the results of our commitment to resource conservation, we hope to make a positive impact on future Olympic and Paralympic Games and other sporting events.”

As part of this pledge, 99 per cent of goods procured for the Games will be reused or recycled. Timber has been donated by more than 60 municipalities for Operation BATON (Building Athletes’ Village with Timber Of the Nation). Buildings will be dismantled after the Games and the wood returned to communities for reuse in construction projects.

Another innovation has been to hire equipment rather than buying it. Some 65,000 computers, tablets, and electrical appliances, together with 19,000 office desks, chairs, and other fixtures have been rented for the Games. Once they are over, they will be returned and reused elsewhere.

Perhaps most famously, the Olympic Village has been equipped with 18,000 beds made from recyclable cardboard, which will be recycled again into paper after the Games.

Weightlifters and shot-putters need not be alarmed, however. The frames are more than two metres long and support up to 200 kilograms - more than any athlete weighed at the 2016 Games in Rio. Even the mattresses will be recycled into plastic products.

“The Games are one of the world’s most widely televised events, and they offer an excellent chance to demonstrate sustainable solutions,” says Marie Sallois, director of cooperate and sustainable development at the IOC.

“One of the biggest potential impacts may be through giving visibility to new technologies and ideas, such as hydrogen-fuelled transport. With their emphasis on the circular economy and sustainability, Tokyo 2020 is setting an example to the world of what can be achieved now and in the future.”

Worldwide Olympic Partner, Toyota is providing 500 cars and 100 buses powered by hydrogen fuel cells to ferry athletes, coaches and officials between venues. As part of its commitment to creating a hydrogen-based economy, The Tokyo Metropolitan Government has already installed 35 hydrogen filling stations around the city. Hydrogen also provides heat and light for the Olympic Village.

For the first time, hydrogen from solar power fuelled the Olympic Torch during part of its journey and will fuel both the Olympic and Paralympic Cauldrons at the Opening Ceremonies.

“We have very much tried to look at how we can utilise natural wind as much as possible so as not to use air-conditioning,” project architect Kengo Kuma told Architects Journal.

“Using natural wind to ensure comfort in a building is also something which comes from traditional Japanese design and architecture. We are trying to revisit this and bring it to the stadium design in a contemporary fashion.”

In a move to put sustainable technology front and centre, the stadium’s solar panels are deliberately prominent. The panels, also used to power the watering systems of the plants and greenery that surrounds the stadium, are visible to the audience when looking up from their seats.

“We were looking to make this environmental technology very visible as part of the design,” Kuma said.

Even some of the iconic blue seats from the 1964 Olympic Stadium have found a new life. Furniture company Karimoku salvaged 700 of the old seats during construction of the new Japan National Stadium and have repurposed them into a limited edition range.

As the Harvard report authors note; “achieving sustainability while delivering cost savings can be achieved simultaneously and synergistically. They need not be mutually exclusive goals.”