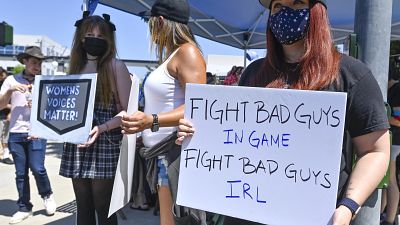 Blizzard staff staged a walkout on August 2 in support of the alleged victims of sexual harassment at the company   -   Copyright  Jeff Gritchen/ Orange County Register/SCNG
By Tom Bateman  •  Updated: 05/08/2021

The suit, filed in the US by Califonia's state employment department, contains explosive and lurid allegations of a "frat boy culture" at Blizzard's parent company Activision Blizzard and alleges a systematic failure to address workplace discrimination within the company's studios.

Brack was allegedly aware of "numerous complaints" of harassment, discrimination and retaliation dating back as far as 2019, but according to the lawsuit documents, he and the company's human resources staff did not "take effective remedial measures".

In a letter to employees obtained by Bloomberg, Brack called the allegations "extremely troubling".

"While I can't comment on the specifics of the case as it's an open investigation, what I can say is that the behaviour detailed in the allegations is completely unacceptable," he added.

California-based Activision Blizzard – formed by a merger of Activision and Blizzard Entertainment in 2008 – is one of the world's largest gaming companies. It is best known for the blockbuster Call of Duty franchise, as well as longtime online hit World of Warcraft.

The company has denied the allegations.

What does the lawsuit say?

The legal documents detail an alleged "frat boy" atmosphere within the game studio. It details how female staff members were "groped" during so-called "cube crawls," in which male staff members would drunkenly "crawl their way through various cubicles in the office".

One female complainant cited in the lawsuit claimed she was refused a promotion "as she might get pregnant and like being a mom too much".

In perhaps the most shocking case cited, legal documents allege that one female employee committed suicide while on a business trip with a male colleague who had brought lubricant and sex toys along with him.

On Monday, over 1,500 employees at Activision Blizzard staged a walkout, both in person and online, in solidarity with the alleged victims, organisers said.

What has Activision Blizzard said?

Ex-Blizzard president Brack stated in a letter to all employees that "it is completely unacceptable for anyone in the company to face discrimination or harassment".

"We take these claims very seriously," he said.

In the days following California's decision to sue the company, Activision Blizzard CCO Fran Townsend said the lawsuit painted "a distorted and untrue picture of our company".

"We cannot let egregious actions of others, and a truly meritless and irresponsible lawsuit, damage our culture of respect and equal opportunity for all employees," she wrote.

In his letter, Kotick said an external law firm would review the company's policies and procedures to "ensure that we have and maintain best practices to promote a respectful and inclusive workplace".

Kotick said the company would continue to investigate "every claim" of discrimination and harassment, and that any manager or executive found to have impeded such investigations would be "terminated".

On Tuesday, Activision Blizzard announced Brack had left the company "to pursue other opportunities".

In a statement, the company said his replacements, Jen Oneal and Mike Ybarra, would "share responsibility for development and operational accountability for the company".

A statement published by the studio's World of Warcraft development team revealed that the fallout from the allegations would also be felt in the game's fictional world of Azeroth, as some content would be removed in order to provide a more "inclusive, welcoming, and safe environment".

"While we turn to our team for guidance in our internal work to protect marginalized groups and hold accountable those who threaten them, we also want to take immediate action in Azeroth to remove references that are not appropriate for our world," the statement said.

Could this South Korean sleep technology be the stuff of dreams?

It's red hot in Tokyo. Here's how the Olympic athletes are coping