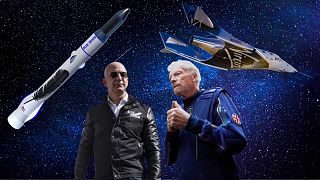 The blackness of space, the thinness of the atmosphere, and the lack of borders below. These are the three things that astronauts normally mention when you ask them about their first impressions from orbit.

For those of us who are lucky enough to have met professional spacefarers, these answers have become something of a cliché.

However, if we unpack them, turn them around and reflect on them in the light of the dawning age of space tourism, then perhaps those three observations will herald a change in mindset on the environment.

Is there a chance that this decade's generation of privateer space tourists will emerge from their shiny new capsules with a newfound appreciation of our planet? If you watch the latest video from Branson's team at about one minute thirty seconds into the clip, you might be able to see one of the first examples of that process in action.

Seeing the brilliance of Earth

Richard Branson flew up to an altitude of 85 kilometres in Virgin Galactic's VSS Unity on Sunday, and Amazon founder Jeff Bezos will blast above the 100-kilometre altitude Kármán Line on 20 July in Blue Origin's New Shepard 4.

Both of them will be able to say that they have been to the edge of space, albeit just for a few minutes. They won't orbit around the Earth, as Yuri Gagarin did in 1961, and they won't cruise along 400 kilometres above our heads like Thomas Pesquet and his crewmates today.

However, both Branson and Bezos will have the most outstanding view across the countries below, they will see the curvature of the Earth, and they will be confronted by the chilling blackness of outer space.

British ESA astronaut Tim Peake once recounted to me the first moment he saw the vast universe before his eyes as he took a pause during an ISS spacewalk.

People like Tim are incredibly brave, but I didn't get the impression that looking into the void made him feel at all reassured or comforted.

The first man to spacewalk, Russian space legend Alexei Leonov once recounted to Euronews his brief venture into the nothingness around our planet, his eyes full of wonder as he described "the very black sky, black as coal, bright, un-flickering stars, and so many of them”.

Even in his twilight years, you could see that it was a vision that continued to blow his mind.

Those who have witnessed the universe first-hand often recount how our blue planet is a unique oasis amongst an all-enveloping blackness.

So, let's hope that Branson, Bezos, and the other rich and influential people who pioneer these fleeting forays into space will return humbled by the absolutely epic emptiness of our universe.

Let's hope that they briefly turn their heads away from the brilliance of the Earth below and contemplate the infinite expanse beyond.

It's a place where even the wealthiest people in our world are tiny specks of insignificance.

A chance to witness the fragility of our atmosphere

The first time I met French astronaut Jean-Francois Clervoy he recounted his Shuttle ride and the moment when he saw our atmosphere hugging the curve of the planet. He described what he saw in French - "l'atmosphère, cette fine couche qui nous maintient en vie" - 'the atmosphere, this fine layer that keeps us alive'.

Many other astronauts I have met have talked passionately about their first impressions of the fragility of our atmosphere, a thin wrapping of gases protecting us from the cosmos. From ESA's Samantha Cristoforetti to NASA's Chris Ferguson, their memories are the same.

They don't describe it in a heavy-handed or overly eco-conscious way, just in that matter-of-fact 'yes, I just flew to space' way that astronauts have. And each time they conclude with a similar point - our atmosphere needs to be protected.

Perhaps it will inspire them to insist on rapid advances in our actions towards polluting this fine layer that allows us to breathe.

There are many counter arguments to this of course - privately owned rockets using precious resources and leaving vast plumes of greenhouse gas emissions in their wake are about as un-green as it gets - but there is still a chance that both hearts and minds will be moved in a more ecological direction by the spaceflight experience.

Viewing the world without borders

Heading to the final frontier gives the space tourist the chance to see that there are no borders visible from space.

There is no line on the map between Texas and Mexico, or Russia and China. Ask astronauts about Europe from orbit and they always describe the snowy Alps and glinting Mediterranean.

Tim Peake, Thomas Pesquet and Alexander Gerst all told me that they were in awe of the tiny Caribbean islands and reefs they saw from orbit, and again and again they stressed how these places need to be cared for and protected.

When the space tourists of the 2020s look down they won't see the countries themselves, but the ensemble of green farmland, white-peaked mountains and grey-brown cities that make up our world.

It's the view you get from an airliner times ten, quite literally, and that's a broad enough perspective to give anyone pause to reflect on how we are changing our planet.

Space tourism offers the chance for many hundreds of people to see our planet and our universe from the same perspective as the world's astronauts.

Among the first few hundred to fly will likely be some of the world's richest and most influential people: the kinds of people who build planet-straddling corporations or run continent-wide countries.

Plans for the first sustainable city on Mars unveiled