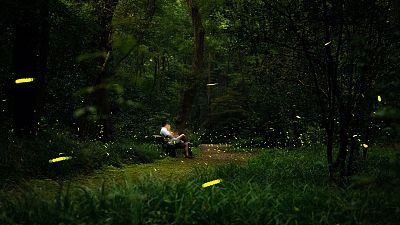 There are many reasons why fireflies glow. One of the best-known examples of bioluminescent beings in nature, fireflies use their light as a warning to potential predators, to identify other fireflies, and of course, to attract a mate.

But while the sight of them lit up is enrapturing, these small insects have in turn inspired a light bulb moment for a team of international researchers at the University of Missouri in the US.

Harnessing the same chemical reaction that makes fireflies glimmer, the team has developed a medical imaging device that lights up when inserted inside the body.

Potential future uses for such a device, in both humans and animals, are already wide-ranging, including the development of better treatments for cancer, diabetes, and infectious diseases.

"This is the first example of a low-cost, portable bioluminescence imaging tool that can be used in large non-transgenic animals, such as dogs," said Elena Goun, the team’s leader and an associate professor of chemistry at the University of Missouri.

So, how exactly does it work?

A firefly lights up when oxygen reacts with an enzyme called luciferase, causing the tip of its abdomen to emit “cool light” energy as opposed to heat.

In much the same way, the imaging device produced by the University of Missouri team is able to gauge the condition of an organ by detecting light levels from a reaction inside the body.

Once it's inserted into the body and reaches its target organ, the device releases a light-emitting compound called luciferin into the bloodstream.

The amount of luciferin released will be higher if the level of biological activity in the organ - for example, the toxicity of the liver - is higher.

When the luciferin in the blood reaches a biodegradable, injectable "plug" containing luciferase, it sets off the same biochemical reaction as the firefly, emitting light.

This is a way we can monitor, in a minimally invasive way, a patient’s physiological response to whatever treatment is administered to him or her.

A portable light detector roughly 10 millimetres wide - smaller than the diameter of a penny - is then placed on the surface of the body near the inserted device and measures the intensity of the light.

Depending on the levels of light being produced, doctors are able to determine how healthy the organ is.

Is this the end of invasive tests?

Ultimately, having a device that can definitively tell whether a treatment is working to repair an organ or not could have much wider implications for patient care by ending uncomfortable and invasive tests.

"This is a way we can monitor, in a minimally invasive way, a patient’s physiological response to whatever treatment is administered to him or her," said Jeffrey Bryan, director of the Comparative Oncology and Epigenetics Laboratory at the University of Missouri and a co-author of the study.

"Right now, most of the time we are looking for responses to treatment by asking the patient how they feel and then doing big, invasive, expensive tests to see if the treatment is working.

"Sometimes, that requires multiple procedures. But, if we can monitor for the desired effect in a minimally invasive manner and continue monitoring the progress over a long time period with this technology, that would probably reduce the need for more invasive testing".

Is the world’s smallest wireless chip the future of healthcare?

Will microchip implants be the next big thing in Europe?