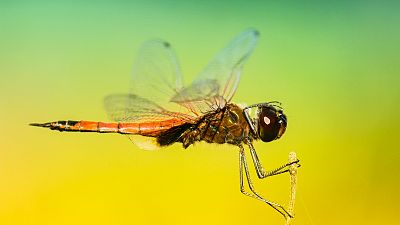 When it comes to intelligent design, it’s sometimes hard to beat mother nature.

For researchers in Australia, that has meant going back to the original blueprints of one of the oldest flying machines in the natural world to enable them to further advance the future design of drones.

The practical uses of drones have rapidly expanded in recent years. The technology is used for surveillance purposes by military and police forces, filming and photography, wildlife conservation and more.

Drones have proven their value more recently during the coronavirus pandemic as a means of delivering essential items, such as food and prescriptions, to those self-isolating.

But as with all technology, continuing to innovate will be key to their continued relevance.

Their flying abilities have evolved over millions of years to ensure they survive.

With this as their focus, a team of PhD students at the University of South Australia (UniSA) have drawn inspiration from a 300-million-year-old aeronautic wonder - the dragonfly.

By studying its particular skills in hovering, cruising and aerobatics, the researchers believe the dragonfly can offer invaluable engineering insights into the designs of future flapping-wing drones.

"Dragonflies are supremely efficient in all areas of flying. They need to be," said Javaan Chal, a professor of sensor systems at UniSA who is leading the team.

"After emerging from underwater until their death (up to six months), male dragonflies are involved in perpetual, dangerous combat against male rivals.

"Mating requires an aerial pursuit of females and they are constantly avoiding predators. Their flying abilities have evolved over millions of years to ensure they survive".

Working remotely due to the ongoing health crisis, the team used whiteboards and put together prototypes in improvised laboratories at home in order to produce a groundbreaking study which has now been published in the journal, Drones.

Capturing dragonflies is notoriously difficult, according to the researchers, forcing them to find more creative means to be able to study the insect’s unique body.

One such way was developing an optical technique to photograph the wing geometry of 75 different dragonfly species from museum collections.

In a world-first experiment, they then reconstructed 3D images of the wings, comparing the differences between the species.

"Dragonfly wings are long, light, and rigid with a high lift-to-drag ratio which gives them superior aerodynamic performance," said Chal.

In comparison to current drone designs which are often not energy efficient and cumbersome, the team believes dragonfly-inspired drones can replicate similar aerodynamics to reduce drag and improve load capacity.

"They [dragonflies] can turn quickly at high speeds and take off while carrying more than three times their own body weight," added Chal.

"They are also one of nature’s most effective predators, targeting, chasing and capturing their prey with a 95 per cent success rate".

So, what are the implications of the study for future drone design?

According to the UniSA team, dragonfly-inspired craft could be particularly adept at collecting and delivering awkward, unbalanced loads, exploring delicate natural environments and executing long surveillance missions. Furthermore, they would be safer while operating near people.