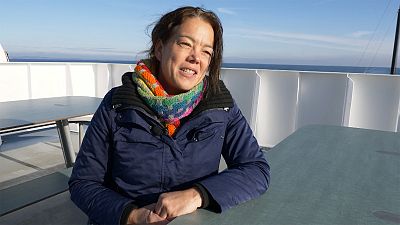 Ellen, the world's most powerful all-electric ferry, has been linking two Danish islands for a few months.

As other electric vessels are being built, we asked the E-ferry project coordinator, Trine Heinemann, to tell us the reasons behind the shift towards electrification.

"In terms of building cost, it's more expensive to build a battery-driven vessel compared to a conventional vessel. But of course, the operation costs are significantly lower so at some point between 1 and a half to 3 years we will start actually making money or saving money on the overall cost."

"This is why other companies are interested in having electric ships?"

"That, and also the fact that there are now coming in some new requirements and regulations in terms of how much ships are allowed to emit in terms of greenhouse gases and particles."

"There are both national laws about emissions in harbour areas where you want to make things better for the city environment basically, but there are also international regulations and part of that was started out by the International Maritime Organisation, very recently joining this CO2 reduction goal, so now maritime transport is also part of that."

"And that is implemented in different kinds of regulations about every ship having to reduce its emissions over time at a certain rate."

Could jellyfish be the answer to fighting ocean pollution?