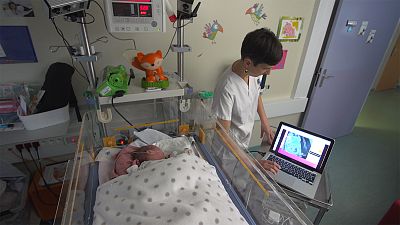 "Europe's neonatal units have to cope with around 300,000 premature babies that are born every year across the continent. The main immediate risk for these tiny and vulnerable human beings is infection. This can be fatal in their condition.

So how can infections be detected more quickly so that we can take the right decisions? In Rennes, researchers are developing a support tool to aid those medical decisions, powered by an information-collecting artificial intelligence, entitled Digi-Newb.

One of the babies in the unit in Rennes is Elea, who was born four months prematurely, weighing only half a kilogram.

Her mother, Catheline Quenard, says it's been a difficult and anxious time:

"In the first moments, we were living minute by minute, hour by hour. Now it's a little bit more day by day. We don't know what tomorrow's going to be like. Today she's fine. This afternoon? We don't know."

Premature babies' immune systems are so fragile that up to a quarter of them can develop an infection. For babies like Elea, early detection of an infection could be very important.

That's where Digi-Newb could be so useful. The new digital system aims to detect any infections before there are visible symptoms and then send an alert to medical staff.

"On one hand, the clinical signs of illness are not very specific and they can arrive late. And on the other hand, if the babies are infected, they are at serious risk - or at least more susceptible to illness in the future.

"For these reasons, antibiotics are often needed. Large doses of them are not good for newborn babies or for the immediate medical environment."

The new system records the babies' vital signs such as heart rate and respiration but, thanks to the cameras, it also captures images and sounds previously only observed by the eyes and ears of the medical staff.

Florence Geslin, a nurse at the unit, says the new system will increase the staffs' ability to detect infection issues earlier on:

"Sometimes there can be children who are more tired, who don't open their eyes like they used to before, or who move less. This is what we are going to try to monitor, to enhance the care of the children".

Research funded by the European Union enabled the huge task of compiling data from the observation of 500 babies. This was followed by the collation and synthesis of the information using deep learning techniques. The aim was to identify common characteristics within the mass of data and then to simply divide it into two categories: healthy babies and potentially ill ones.

Guy Carrault, a signal processing researcher from the University of Rennes says this makes the situation much easier to read:

"And from there, we extracted what we call a network. And similarly, the organisation of this network is totally different in the infected case and in the uninfected case."

When the network's value goes above a certain point, an alert is displayed.

Patrick Pladys says the alerts arrive far earlier than by those from simple observation previously:

"The staff are going to get an alarm 12, 24 or even 48 hours before the one they used to get. So on one hand, they will have time to evaluate the case and so may simply decide to extend their evaluation.

"Or they can decide that the evidence provided by the index is compelling enough to decide on antibiotics for a baby straight away."

Digi-Newb is not intended to replace, but simply to complement, the support and monitoring by doctors, nurses and perhaps most importantly, parents.

This report was filmed before the coronavirus outbreak.