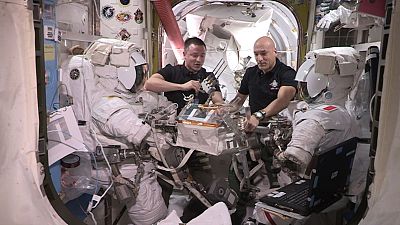 Euronews space correspondent and European Space Agency (ESA) astronaut Luca Parmitano has sent the latest instalment of Space Chronicles, a series in which he documents his experiences on the International Space Station (ISS) over a six-month period. On this episode, Parmitano is joined in the airlock by NASA astronaut Andrew Morgan. Together they'll be repairing an Alpha Magnetic Spectrometer in space.

Parmitano explains the task ahead:

"We’re going to open up the system, we’re going to cut the current tubes - just like you do when you’re doing a heart transplant - and then we’re going to take the new pump - the new 'heart' - and then we will take new tube and install those tubes on to the ones that exist and start circulating the cooling system that we brought up from space. So, in a way, it’s open-heart surgery in space on a very complex system."

Magnetic spectrometers are hard to fix on the ground and Parmitano and Morgan have the added challenge of doing it in space, wearing restrictive and pressurised spacesuits.

They'll also be carrying four or five big bags of tools that they'll be using during the repair.

"It is very much like open-heart surgery," Morgan says. "I'm not a heart surgeon but I am a physician, so I thought there's a lot of interesting analogies here."

One of Morgan's roles is to be managing all these tools while Parmitano does most of the cutting and swaging.

Our disposable culture must end. We need the ‘right to repair’ not recycle our smartphones ǀ View