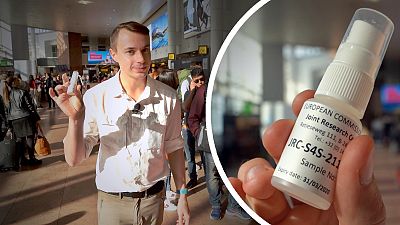 The explosive TATP has been used in several deadly terrorist attacks over the past two decades, which is why it is important that police are able to detect it.

But the substance is extremely dangerous to handle, making it difficult to train police dogs or to test detector devices in crowded places like airports.

That’s why European researchers have come up with a safe alternative — a TATP spray.

Brussels Airport was the site of a bomb attack in 2016 that claimed 32 lives and injured over 300 other people.

Here, police have trained specialist dogs to trace even the tiniest amounts of explosives.

Rony Vandaele, director of Belgian Federal Police's canine unit, told Euronews the dogs are better than all the alternatives.

"We can train them very well, we can teach them different kinds of explosives, and the way they work and the speed they work at is very effective," he said.

And you can't use a robot to replace them, to do the same work in the same amount of time".

To train the dogs, officers spray pieces of luggage with a solution containing TATP and line them up with people carrying unsprayed bags.

The police dogs reliably find the correct bags hidden among the passengers.

Vandaele said the spray contained "real TATP, but in a very small quantity."

"So it’s a very useful and safe way to train dogs, and be sure that they can detect the suicide attackers willing to do attacks in some public space."

The spray is developed at the European Commission Joint Research Centre (JRC) in Geel, in the north of Belgium. produced with advanced equipment in well-controlled laboratories.

Authorities across the EU use it to ensure their explosive detection methods meet stringent European standards.

The spray is part of a test kit containing samples of various dangerous materials produced for aviation security inspectors.

Security staff are trained to use this kit with equipment like the electronic detectors that passengers will be familiar with seeing at airport checkpoints.

"The main component of the [TATP] spray is isopropanol, so it can be safely transported whenever there's need to use it," said Dimitris Kyprianou, a chemist at the JRC in Geel.

"Isopropanol quickly evaporates, leaving some TATP on the surface — a very small amount which is safe to handle".

Bartel Meersman, who leads the transport and border security unit at the JRC in Geel, said their work "gives necessary tools to the authorities to verify the equipment or to work better with the dogs.

"Of course, we're working to increase security in Europe, so if people go to a rock concert or they take the airplane at the airport that they can be secure, that they can travel or attend the event in a secure way".