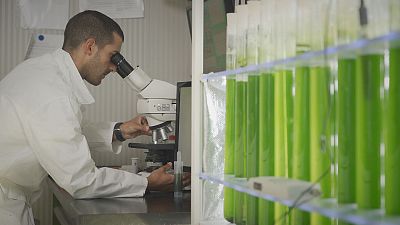 The process is as old as life on earth.

But scientists believe that photosynthesis, where plants use carbon dioxide, water and light to make their own food, is also a valuable resource in the treatment of wastewater.

The challenge of treating saline wastewater

The food and drink industry produces huge quantities of effluents, but current methods to treat it are often very expensive and not ecofriendly.

There are around 22 000, wastewater treatment plants across Europe and the amount of energy they use accounts for more than 1% of the overall electricity consumption in the EU.

The benefits of algae in wastewater treatment

The Camporosso microalgae farm in northwestern Italy is part of the European 'Saltgae' project, which aims to develop and demonstrate the benefits of algae in wastewater treatment.

Researchers at Camporosso are cultivating microalgae that absorb the nutrients from the wastewater for their growth.

It's a technology that they believe could help industries meet EU financial and environmental requirements.

At the facility, a biotechnological greenhouse has been fitted with 500-meter square long “Green Wall Panel” photo-bioreactors, designed to create high photosynthetic efficiency.

Technical manager of Saltgae, Silvio Mangini, explains how they are using microalgae to treat water from the dairy industry:

"The water must first be purified before getting to the second stage, during which it will be used to grow the culture of microalgae in the ponds here.

After harvesting we obtain ... treated water, which is clear and free from polluting substances, and ... biomass, which is a high added value product that can be sold on the market once it has passed our strict quality control".

Microalgae such as spirulina have been around for 3 billion years and it has many beneficial qualities, including the ability to grow in high salinity water.

Production manager for Saltgae, Daniele Carlini, says it is capable of storing many contaminants that are produced from the industrial process:

"Contaminants such as nitrates, are the main nutrient needed for the algae to grow.

The alga is able to store it as protein inside its tissues through photosynthesis, which allows it to increase its concentration in the culture ponds."

Sunlight, carbon dioxide, and wastewater. That's about all these algae need to enable them to consume the pollutants and grow.

This self-sufficient process can produce as much as 20kg of dry spirulina per day.

The green powder can then be sold to produce cosmetics, fertilizers, animal feed, or even material for 3D printing. An opportunity for manufacturers wanting to benefit from their wastewater.

A full-scale test was carried out at the KOTO factory in Ljubljana, Slovenia which specialises in collecting animal hides.

The water coming out of its warehouse is three times more saline than the sea, making it very expensive to treat with conventional methods, which require a lot of oxygen.

But an algae culture has been installed at the factory which produces oxygen for free and in a sustainable way.

The algae are mixed with bacteria, absorbing the carbon dioxide it produces and turning it into oxygen.

Technical manager at Saltgae, Robert Reinhardt, says they are saving approximately 50 to 70% of the energy used in wastewater treatment:

"There is less energy consumption, less carbon dioxide emissions and another important point is that with more uptake of nutrients into the biomass, we have fewer problems with eutrophication, we can recycle nutrients instead of releasing them in the environment producing bad effects in the environment."

So, for now, the work continues to test various species of algae, and install cultures near European factories, and pave the way towards a more circular economy.

Could microalgae transform our food and cosmetics industries?

How do you grow microalgae?