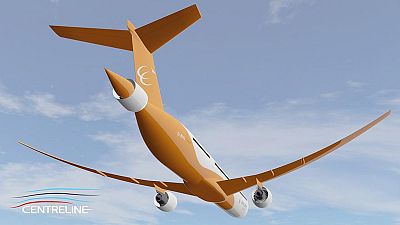 Engineers in the EU's Centreline research project believe they can make a more efficient, less polluting airliner by improving on the current design layout. The innovation involves fitting an electrically powered fan at the rear of the aircraft. It’s cutting edge technology, and there is plenty of debate over how they can make the idea fly in the highly competitive world of aviation.

The research is spread across six EU countries, bringing together the best engineers to study the concept. At Delft University of Technology aerodynamics experts are using lasers to carefully fine tune the concept and understand how placing an engine at the rear of the aircraft impacts the fuselage design.

Dr Arvind Gangoli Rao, Associate Professor in Aerospace Engineering at TU Delft explains the fundamentals: "The idea is that the aircraft would have three engines, instead of two. So one at the back, and two on the wings. These engines on the wings will provide the electrical power that is required to drive the rear-mounted electrical motor and fan."

The innovation at the heart of the Centreline project is the way the air which is already dragged along by the plane close to the fuselage is accelerated by the rear fan, to create thrust.

Centreline Project Coordinator Arne Seitz explains: "It takes the air that is flowing along around the fuselage, takes it up, re-energises it, and thereby produces the required thrust at a lower power input, and this improves efficiency. It will allow us to reduce greenhouse gas emissions. So that's predominantly CO2 emissions, but also NOx, and so forth.

That same effect is already used in boats and submarines, but the experiments in the wind tunnel reveal how adding a large fan at the rear of the plane has a big impact on a modern passenger aircraft fuselage, as Biagio Della Corte, PhD Student at TU Delft, explains.

"A thing to keep in mind when making this kind of design compared to conventional designs is there is a strong interaction between the propulsive system and the aerodynamic surface, this interaction is really important, and you can’t forget it during the design process," he says.

Meanwhile engineers at another Centreline project partner, The University of Cambridge, are facing the other big challenge: developing the electric fan engine. Placing the fan blades in the turbulent air at the rear of the plane means they have to be very strong.

"The air that's coming into the inlet of the engine is very distorted, that's to say it's not uniform, it's not all travelling at the same speed," says Research Associate Alejandro Castillo Pardo. "What happens with the engine in these cases means it tends to stall. So we have to improve the design of our fan blades to prevent any the failure. And apart from never failing, the design needs to be more efficient to reduce the fuel used in the flight."

The Centreline team has a new fan blade form, that could solve the problem. Castillo Pardo shows us his latest design: "The new one has a more three dimensional form, a lot more curved, that should be able to help us deal with the distortions in the flow and to recover the efficiency that we have lost due to the slower flow of air."

The engineers talk of fuel savings from 3 to 6 percent, even up to 11 percent, meaning important emissions reductions on long-haul flights.

"So we feel that this should be an aircraft application case for a large aircraft, long-range," says Seitz, from Bauhaus Luftfahrt.

"So if I install the additional weight on the aft of the fuselage, I certainly want to utilize the additional efficiency gain on a long cruise flight. So, for example, flying from London to Tokyo."

The first aircraft with the third, electrical fan at the rear could be seen flying in the skies in the mid 2030s.

"Futuris" reaches for the sky with the wings of the future