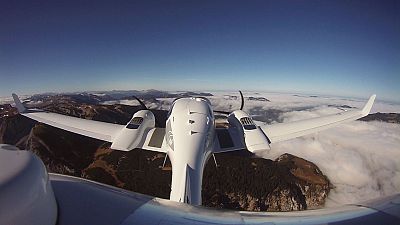 Welcome onboard an aircraft unlike any other. It’s been designed to increase safety on small planes and the stakes are high. At one incident every 10,000 flight hours in Europe, small aircraft have a much worse safety record than big airliners. So to improve that record, European researchers have taken a challenging flight.

Above the Austrian Alps flies what seems to be an ordinary small aircraft. But it holds a secret. The flight controls on board are not manual. Instead, electronic signals and computers
determine the flight pattern. The pilot basically flies the aircraft via a computer. This is what is universally known as a digital “fly-by-wire” flight system.

The system has greatly contributed to flight safety and has been in use for decades in big airliners and business jets. But until now it has been seen as too heavy, too large and too expensive to be installed in small aircraft. But then scientists in a European Union research project decided to provide a helping hand to the less experienced pilots onboard these tiny planes.

And to achieve that, scientists did some sophisticated research. At an aerospace laboratory in Germany, scientists worked to develop hardware and software able to guarantee a safe, automated and autonomous way of flying. To do it they had to create electronic systems which could autonomously overcome any failures in the aircraft’s functions – without the pilot even noticing that a critical failure had ocurred.

The next step was to embed this complex software into a reduced, light hardware adapted to the limited load capacity of small aircraft. But before installing the digital equipment in a real aircraft, a complex simulation had to be done in a unique aeronautical flight facility.

Meanwhile in the Netherlands, researchers tested the digital flight control system in a simulator. It was indeed able to ensure the safety of virtual flights in simulated difficult flying conditions -without the test pilots actively intervening. The system, researchers say, even automatically keeps the aircraft away from dangerous flight patterns.

Back in Austria, the first test flights of the final prototype were considered a success by the scientists, who are now looking ahead.

Manufacturers of small aircraft see this reinforced safety as an ideal marketing tool to seduce potential new customers. Researchers are now considering how to use the same digital flight control not only for cruising but for a bigger challenge: take off and landing.