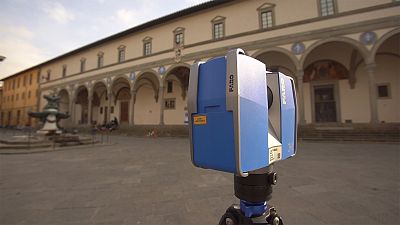 The Istituto degli Innocenti in Florence, the Institute of the Innocents, is a fifteenth century Renaissance children's orphanage. It was the first of its kind known in the world, and for centuries it led the way as an example to other countries in how to care for children.

But how exactly was it designed by the famous Florentine architect Filippo Brunelleschi, and how did it evolve over time?

The building is now Italy's guinea pig for the Inception project at Ferrara University, which hopes to answer these questions. It's developing an architectural and cultural heritage data base using vastly improved 3D imaging which everyone from researchers and institutions to tourists will be able to access.

Researchers at the university are busy gathering visual data through 3D and 360 degree surveys of the Institute of the Innocents.

"We're creating a point cloud survey, that is, we're acquiring a set of spatial coordinates, with millimetre precision, to which we also add data on colour. This will be the starting point for our three-dimensional modeling,"Marco Medici, one of the project's researchers, told Euronews.

The project also involves 10 other EU states which have each selected a culturally important site.

In Greece it's the national museum in Hydra; in Spain it's the Torrelobatón Castle in Valladolid; in The Netherlands it's the church of Obergum in Groningen and in Croatia it's the Cultural Heritage Municipality of Unešić and the Technical Museum Nikola Tesla in Zagreb.

"Each building is unique and has its own identity which we want to transmit to future generations. So, each one of them needs to be documented in a different way. This will result in models able to tell stories, through different types of sources such as documents, tales, songs and traditions," Federica Maietti, the project's technical coordinator, told Euronews.

The main goal of this European research project is to enhance the understanding of our architectural and cultural history in the most innovative ways imaginable.

It's also hoped it will greatly improve how some of Europe's heritage is documented.

"The Inception data base will be an open platform, users will be able to consult data, to study them and also to download them," Roberto Di Giulio, the project's co-ordinator architect.

The information gathered and processed by the researchers will develop new tools to understand how the buildings were designed. And users will be able to explore them in a completely new way - virtually and remotely.

Inception's technologies will be tested at various cultural sites across Europe.

The final output, once available on the open platform, will be accessible to the public through augmented and virtual reality devices, computers and smartphones, via a special app.